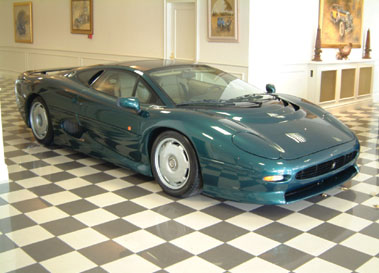 The XJ220 was directly aimed at a Ferrari F40, Porsche 959 audience, the Jaguar competing for the same super rich buyers - an exclusive group amongst whose number were serious top car collectors like Sir Elton John. The Jag supercar was conceived by Head of Engineering Jim Randle, who, after overseeing four years of very hush-hush development work, unveiled the stunning XK220 at the 1988 Birmingham Show. The prototype was powered by a 530bhp 48-valve V12 with 4-wheel drive. The orders - backed up by huge deposits - flooded in.
Following the 1988 takeover of Jaguar by the Ford Motor Company, manufacturing the XJ220, even in limited numbers, was not finalised until 1992, when production was entrusted to Tom Walkinshaw's Jaguar Sport facilities at Bloxham, Oxfordshire. By now, the twelve had been replaced with a more practical to produce twin turbocharged V6, which had been developed in the Group C XJR-10 race programme and was just as powerful. Also, the original 4-wheel drive set-up on the prototype was deemed to be unnecessary and was changed for the production cars to really sturdy 2-wheel drive transmission.
With a global recession in full swing in the early 1990s, however, and after many of those who had invested in deposits were unwilling (or unable!) to come up with their outstanding balances, the Ford accountants axed production after only 271 of the 350 run had been completed and, over the next few years, the stockpile of unsold XJ220s were progressively sold off to discerning collectors.
On offer here is a left-hand drive XJ220, which was acquired by the first owner, a private collector from East Anglia, on the 1st of September 1998, since when it had only been driven the 2757 kilometers displayed on the odometer when entered for this sale and this is believed to be the genuine total for the supercar since it left the works.
The 3498cc engine - a double overhead camshaft, four valves per cylinder, twin-turbocharged V6 with alloy heads and block, which produces an impressive 542bhp at 6500rom - is, of course, really barely run-in and is therefore ready and waiting to deliver its true potential. The same goes for the 5-speed, all-synchromesh box with triple cone synchroniser on first and second gears to withstand vertical take-offs. The independent suspension is by unequal length wishbones and inboard coil springs with dampers and anti-roll bars. Four pot calipers grasp AP Racing brake discs, which are ventilated, cross-drilled and should keep you out of trouble.
This sensational looking and very Grand Tourer, a truly awesome package, can deliver 0-100mph in under 8sec. According to the vendor, the car is still absolutely correct with Malachite green metallic paintwork and beige leather interior in excellent condition. It comes with all workshop manuals and books, wing protectors and a car cover. It was checked by Marque specialist Don Law in 2003, since when it has been stored in a heated garage. We understand that the specialised servicing of this extraordinary model can be undertaken by Jaguar Sport at the Browns Lane factory.
Recent valuations at public auction have resulted in the XJ220 being by far the best value in the supercar market today and this exceptionally low mileage example could become the superstar of your collection for a most reasonable investment.
Please note:
We may have given the impression that only the factory can service these supercars but in fact Don Law and others can perform this task very easily, and indeed do frequently. They advised on certain work on this car but that work was not carried out - as per the letter in the history file.
We now understand that the first owner may indeed have lived in Scotland and not East Anglia and we further understand that it formed part of the 'Fastmaster' production series in the U.S.A. and returned in 1994.
Naturally, as with the majority of these cars, sometimes there was many years before they were registered after they were delivered. The mileage is only believed to be genuine and not warranted as correct from new and we apologise for this error in the text.