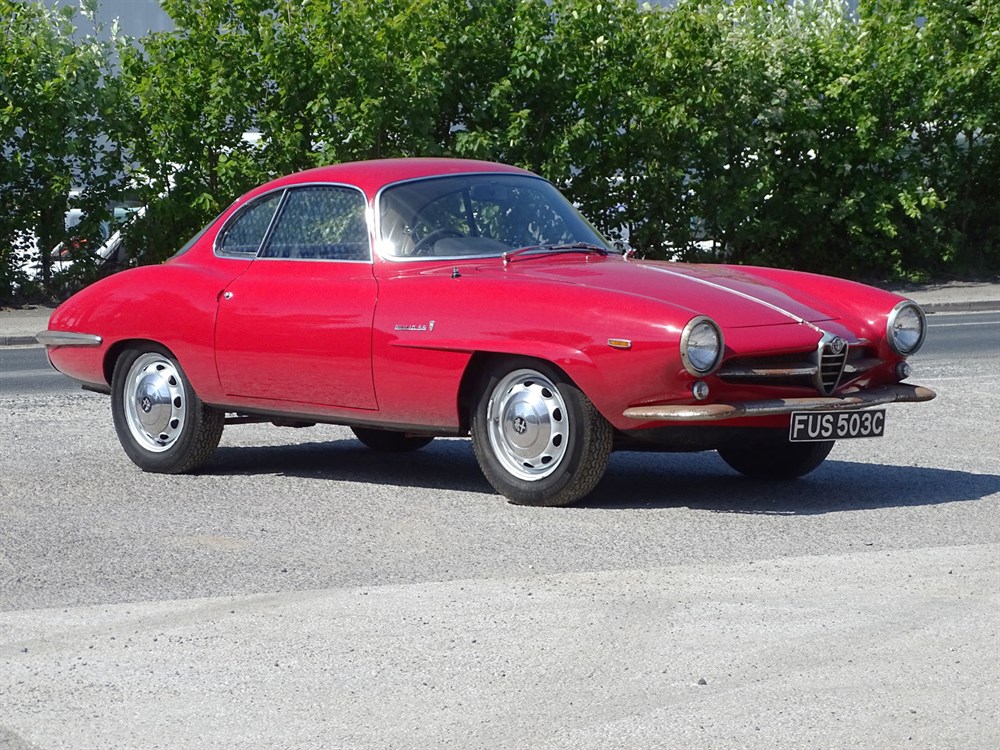 
The futuristic-looking Bertone-penned 1.3-litre Giulietta Sprint Speciale and 1.6-litre Giulia Sprint Speciale, aka SS models, were produced by Alfa Romeo between 1959 and 1966. The series was spawned by a prototype Giulietta displayed at the Turin Salon of 1957. An official production version was then demonstrated to the media at the Monza Grand Prix circuit on June 24, 1959. The first 101 examples were specially prepared to gain FIA homologation, a few of which had all alloy bodies, but most had steel shells matched to aluminium doors, bonnet and boot lid. As one might guess from the profile, the design was extremely aerodynamic, giving a landmark drag coefficient of 0.28 - a figure that was not bettered for the next 20 years. The ensuing production versions of the Giulietta featured steel doors, a switch from 40DC03 to 40DC0E2 carburettors, a higher nose profile, glass rather than Plexiglas windows, bumpers front and rear and a degree of sound deadening. The power output of the 1.3-litre Twin-cam engine was 100bhp and braking was by drums all-round. A reputed 1,366 Giulietta SS examples were built before the model was replaced by the 1.6-litre Giulia. First seen at the 1963 Geneva Salon, the newcomer retained the same design of body and the only visual differences between the two models were the dashboard and the exterior badging. The additional engine capacity raised engine output to 112bhp and most of the Giulia SS models made benefited from disc brakes at the front. Production effectively ceased in 1965 with just one car being completed the following year.

This intriguing righthand drive UK specification 1965 Giulia SS has remained in the same family ownership since circa 1969, and been in dry storage from 1987 until now as a result of a family bereavement - which presumably explains the low indicated mileage of just 42,000 from new. Finished in Red, the car appears to be totally unmolested and retains its original engine and Black leather interior trim. On inspection we noted a wax coating on the underside and boot floor, which may well explain the apparent lack of corrosion. 'FUS 503C' is now offered and green log book , previous registration document, tax discs from 1972 to 1987, and the Alfa even still wears the sticker of its supplying dealer, R C Eaves of Garstang, Lancashire in its back window. A unique and exciting opportunity to obtain such a rare and original car that will, however, require some degree of recommissioning before returning to the road once more.