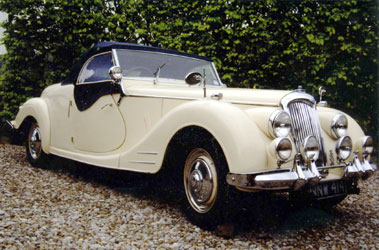 Aimed squarely at the profitable US market, the Riley RMC Roadster was launched in 1948. Based on the same low-slung chassis as its RMB saloon sibling, its sleek two-door bodywork featured cutaway doors, a compact hood, fold-flat windscreen and three abreast seating. An engaging drive courtesy of independent torsion bar front suspension, a 'live' rear axle, Girling four-wheel hydro-mechanical drum brakes and rack and pinion steering, it was powered by a 2443cc 'twin-cam' four-cylinder engine mated to four-speed manual transmission. Quoted as having some 100bhp and 134lbft of torque on tap, it was reputedly capable of over 90mph. Neither flash (think Jaguar XK120) nor quaint enough (think MG TC) to win over the American public, the RMC was quietly dropped in 1951 after just 507 are thought to have been made.

Reportedly restored by ivory carver Brian Marlow during the 1980s, 'NNW 414' was then sold to Andrew Sykes in 1988 who fitted it with a stainless steel exhaust, new mohair hood and radial tyres. Rallied extensively during his custodianship, the Roadster amassed various trophies before being bought by a Catterick-based collector for £33,000. Passing to David Fremberg in 1993 / 1994, it has apparently benefited from "a respray, relined brakes, new cylinder head gasket, replacement steering wheel, recored radiator and regular servicing" since entering the current ownership. Described by the vendor as being in "very good overall" condition save for "an intermittent fuel gauge, over optimistic temperature dial, occasionally belligerent starter button and some minor chrome deficiencies", this delightful RMC is offered for sale with history file, alarm, original tools and MOT certificate valid until August 2007.