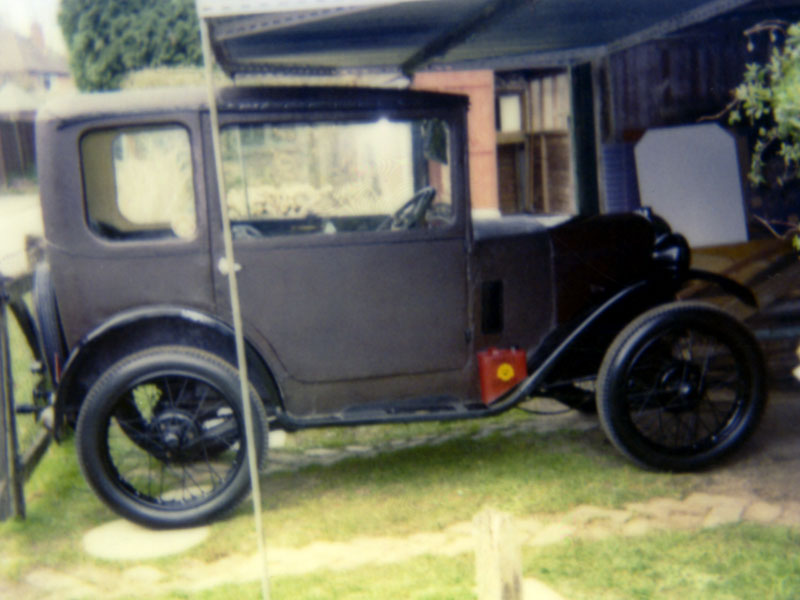 - 'Garage find' in the current family ownership since 1964

Beginning life as a Fabric Saloon in 1928, this delightful Austin Seven was rejuvenated during the early 1960s using the registration number and chassis from a 1930 donor. It has also had at least one replacement engine over time.

Now a 'garage find' in need of restoration, a handwritten letter on file from the vendor's late father gives the following history:

'The Austin was owned at sometime before WW2 by Miss Mabel Bolton who lived in Basingstoke - length of ownership unknown. The car was used until 1958 when it was taken off the road. Sometime around 1960/61 it was found in a London mews garage by Mr Mason from Greenwich. It was in a dismantled state and about to be turned into a special. He negotiated a sale with the owner and had it transported to his home by lorry where he reassembled it and gave it to his fiancée - Miss Beryl Neck. Unfortunately, the original and possibly a continuation logbook had been lost. To register the car he had to buy a 1930 chassis and a few spares to obtain a logbook. These were the remnants from 'MW 7682'. He of course used the engine and chassis numbers from this logbook which of course did not match the earlier car. The chassis number was wrong at 11398 and since I have had the V5 registration document rectified (with the 1928 chassis number) I have added a nought to the 1930 chassis number in the old buff logbook because a digit had obviously been omitted from the end probably when this continuation book was issued. Mr Mason only used the chassis from 'MW 7682' when the assembled the car because it had coupled brakes and the would-be special builder had started to drill holes in the (1928) chassis of 'XV 824'. The fabric has been changed to brown at some stage - probably because the maroon became too faded. At some stage the engine or just the crankcase has been changed because the present engine number is M129267 which would date from about February 1931. In March 1993 I attempted to get the original registration mark of 'XV 824' restored to the car but the London records were lost during WW2. However, I had the V5 rectified so that all numbers stamped on the car match the document correctly. The fact of course remains that the car is 'XV 824' (albeit with a replacement chassis, engine and registration number) - first registered in London in 1928 and the old licences in the holder going back to the 1930s are proof of this'.

Prospective purchasers are reminded that they should satisfy themselves as to the content of the above letter (as well as to the vehicle's condition) before bidding.
Share: