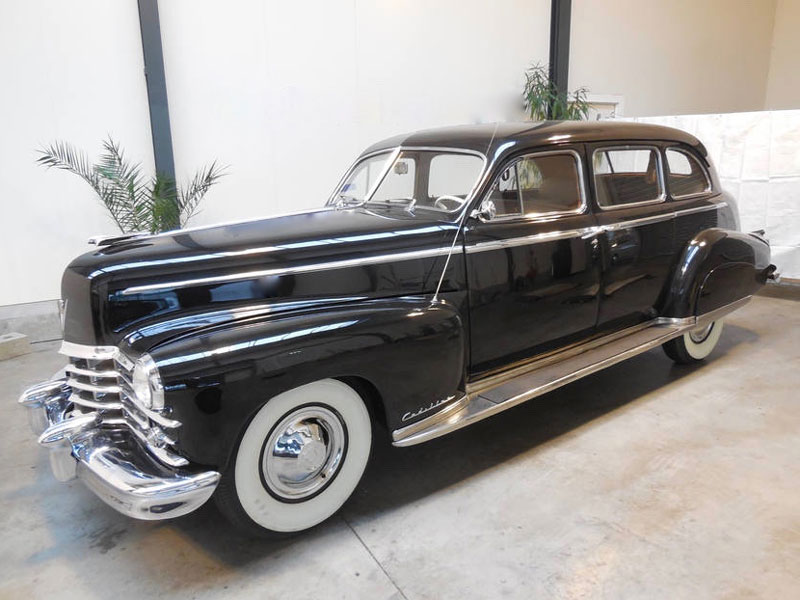 Although it wasn't usual for a clergyman to be chauffeured in a Cadillac, Richard J. Cushing, Archbishop of Boston, Massachusetts since 1944, was no ordinary member of the Catholic Church. This imposing 1949 Cadillac 75 Fleetwood Sedan was his car and is understood to have conveyed him to some major events related to the Kennedy family and thus been witness to world history. The Archbishop, who was made a Cardinal in 1958 by Pope John XIII, was a close friend of the Catholic Kennedy family, who were also from Boston. He officiated at the marriage of John F. Kennedy and Jacqueline Bouvier in 1953, he baptised many of the Kennedy children and gave the prayer invocation at JFK's presidential inauguration in 1961. Cushing also led the religious ceremony at President John F. Kennedy's funeral in 1963. Research indicates that this car would have carried the Cardinal to most, if not all of these happy and sad Kennedy events. Cardinal Cushing (1895-1970) was a man with very liberal views on Catholicism, which led him on occasion to openly disagree with the Vatican. On the other hand he also built bridges between Catholics, Jews and Protestants. Because of his views and his relationship with the Kennedy family he was quite well known in the United States and his portrait was even on the cover of Time Magazine in August 1964. The fact that Cushing owned a Cadillac didn't go unnoticed. One of his followers wrote: "I remember a long time ago, when I was a child, Cardinal Cushing in Boston, he used to drive around in a massive Cadillac."

After enjoying the car for around 15 years the Cardinal had it sold in the mid-1960s. The second owner, Mrs Jeanne Klonel from Indiana, wrote him a letter to tell him that she had bought the car. There is a copy of a letter from the Cardinal in the car's files, dated 1968, to Mrs Klonel, stating: 'I pray that you may enjoy this possession for many more years and that it will carry you safely wherever you go'. He also apologised that it was just a brief letter, because he was still mourning the death of Robert F. Kennedy who had been buried only a few days earlier. In the letter the Cardinal mistakenly mentioned the car as being from 1940. Mrs Klonel's son, Dr Ronald S. Klonel, took custody of the Cadillac in the 1960s and had it refurbished. In the car's history file is an extensive correspondence, including bills and progress reports, on the restoration of the car.

In the 2000's the car was bought by a collector from Finland, who in turn sold it to the present Dutch owner in 2010. The Finnish registration document stated that the Archbishop who led the JFK funeral ceremony once owned the car.

The 1949 Cadillac 75 Fleetwood 5-passenger Sedan has a 160 hp 5.4 litre V8 engine. Only 220 cars of this type were made and this is number 103. It is finished in Black with a Beige/Brown cloth interior with wooden trim, and whitewall tyres and has a 4-speed Hydra-Matic (automatic) gearbox. The car is fitted with electric windows and it still has the original radio. It was one of the last Cadillacs with 'Turret-Top' styling. Although it's an older restoration the car still presents very nicely and hasn't lost anything of its authentic character. It will definitely turn heads at shows or on the road because of its fascinating history and massive size - 5,7 meter (226 inches) length, 1,83 meter (68,5 inches) height and 2 meter (82 5/16 inches) width. The Cadillac runs very smoothly and the gearbox, the power steering and the brakes are all said to be in good working order.

The car comes with a large history file.
Share: