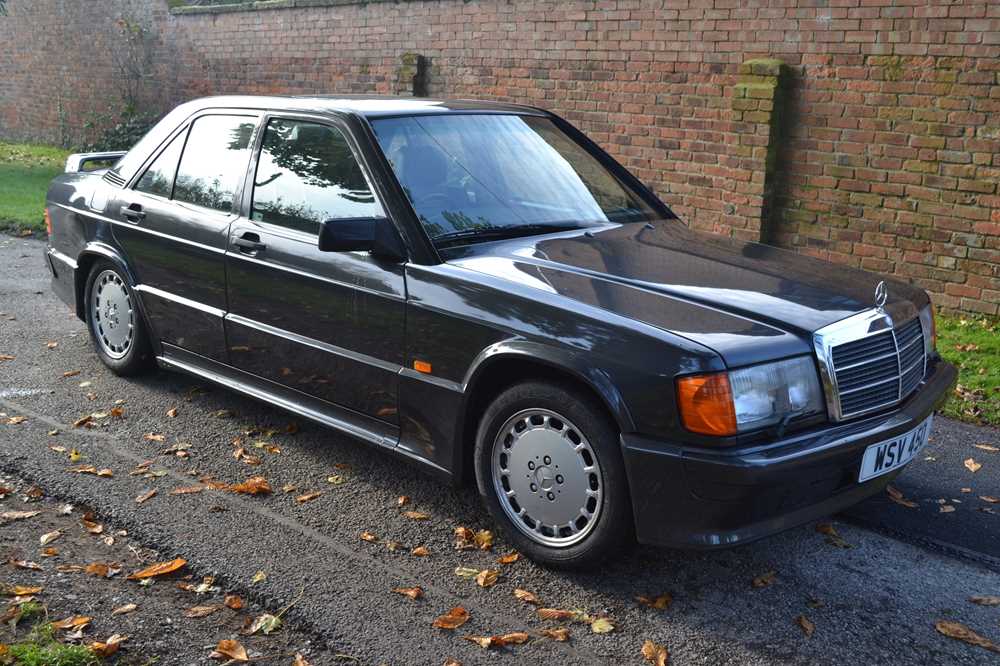 Unveiled at the 1983 Frankfurt Motor Show, the 190E 2.3-16 was arguably Mercedes-Benz's most driver-orientated car since the legendary 300SL ‘Gullwing'. The flagship of the recently introduced 190 (W201) range, the newcomer had originally been conceived as a potential World Rally Championship contender before morphing into a high-performance road car. To exploit the W201's even weight distribution and advanced suspension design (its sophisticated multi-link rear set-up was subsequently cribbed by numerous other manufacturers), Mercedes-Benz commissioned Cosworth to design a ‘cutting edge' sixteen-valve cylinder head for its 2299cc four-cylinder M102 engine. Producing 185bhp and 173lbft of torque, the resultant powerplant exceeded both parties' expectations. Equipped with a five-speed Getrag manual gearbox, the 2.3-16 was reputedly capable of 143mph and 0-60mph in 8 seconds flat. To harness such performance the 2.3-16 featured an electronically controlled limited-slip differential, lowered/stiffened suspension, and powerful ABS brakes. The standard-fit body kit not only added an element of refined menace but also reduced the sports saloon's drag coefficient to just 0.32. In 1988, Mercedes-Benz created the 2.5-16. Engineered in-house, its larger 2498cc unit developed 204bhp @ 6,800rpm and 177lbft of torque. As well as being notably quicker (150mph, 0-60mph in 7.1 seconds), the 2.5-16 achieved considerable success in the prestigious DTM race series. Campaigned by AMG with factory backing, the distinctive silver and black championship-winning machines netted the last of their 50 victories during 1993. Priced at £38,272 in the UK, the 2.5-16 was nearly ten thousand pounds more expensive than the contemporary BMW M3. During its four-year production run (1988-1992), just 4,784 2.5-16s were sold worldwide.

This particular right-hand drive example was manufactured in 1989 and was first UK registered in February that year. Fitted with the 2497cc engine and five-speed dog-leg manual gearbox. Purchased by the vendor in 2015 and used sparingly since covering only around 1,000 miles to the present day. Subject to a top-end engine refurbishment and bare metal respray in circa 2010, the 190E is fitted with aftermarket Powerflow exhaust and a non-standard stereo, although the multi-changer is still present in the boot. With only six former keepers, and a recorded mileage of 109,200 miles, the Cosworth was previously offered for sale with comprehensive service history including original stamped service book and warranted mileage (as recently as five years ago), however, this paperwork has since been regretfully misplaced. Offered with V5C.

Please Note: WSV 450 is not included in the sale.