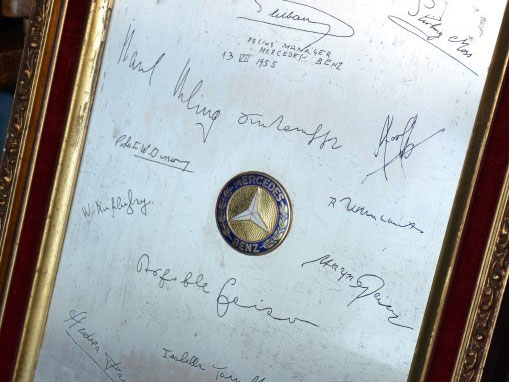 A very important piece of motor racing ephemera, this body panel and bonnet badge is believed to have been removed from J.M Fangio`s Mercedes-Benz W196 'Silver Arrow'. It was then signed with a scribe pen and washed over in black ink by the 1955 'Team', including works drivers J.M Fangio and Stirling Moss, along with the team manager Alfred Neubauer, plus several others (and their partners). We believe this item to be the only official memento kept from a dinner that took place in December of 1955, following the withdrawal of the Mercedes-Benz team from all forms of motorsport. An accident at Le Mans a few months earlier, involving a Mercedes-Benz 300SLR, resulted in the death of 83 people and injury of 120 others. Framed for display.
Share: