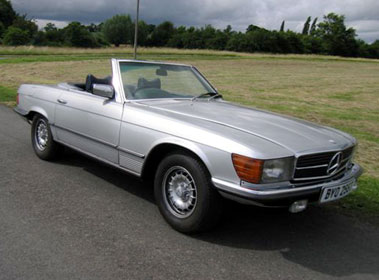 Nicknamed 'der Panzerwagen' by Mercedes-Benz's own development engineers, the R107 series was the result of an extremely thorough design process. In an attempt to avoid falling foul of threatened American safety legislation, Stuttgart produced an open car whose structural rigidity surpassed that of some contemporary saloons! Indeed, even now some thirty-eight years after its introduction the R107 retains a reassuring air of solidity. Allied to this was sure-footed handling courtesy of all round independent coil sprung suspension, power assisted steering and disc brakes. Always more of a grand tourer than an out and out sports car, the vast majority of R107s were fitted with automatic transmission. Powered by a 4520cc SOHC V8 engine, the 450SL model was quoted as developing some 225bhp and 278lbft of torque. A strong performer, it remained in production until 1980.

Finished in silver with blue upholstery, this particular example is variously described by the vendor as being in "very good" (bodywork, electrical equipment) or "excellent" (automatic transmission, paintwork) condition. While, he notes that (a) "the engine is fine apart from a slight exhaust manifold leak" and (b) "the interior trim is good for a thirty-year old car". Said to have "only covered 16,000 miles since a new timing chain and tensioner were fitted in late 2004 (bill enclosed)", 'BYO 255T' is also reportedly accompanied by "a £378 invoice for a new exhaust system". Riding on alloy wheels, this handsome 450 SL is offered for sale with the aforementioned paperwork and twelve MOT certificates; the current one running until February 2010.
Share: