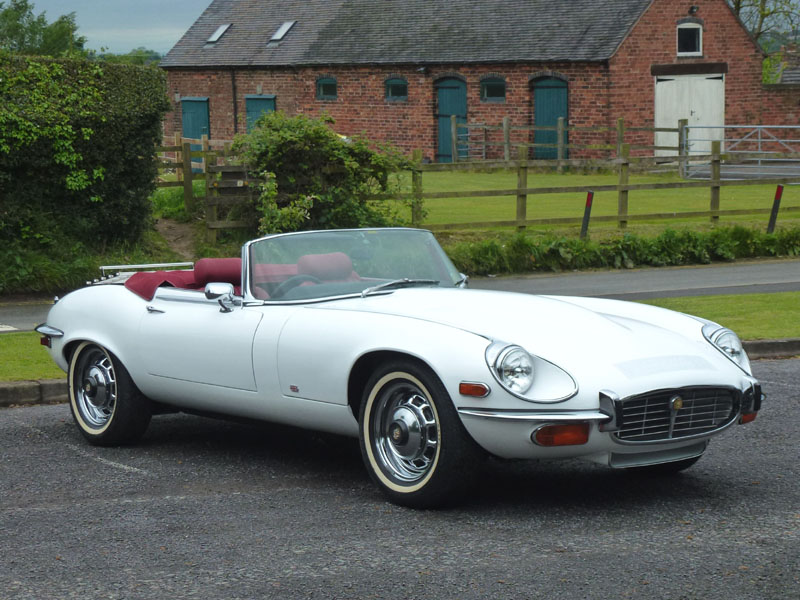 - Sold new in America and believed to have had one doctor owner in Dallas, Texas, until acquired by the vendor.

- Imported by the former engineer vendor in late 2015 and restored by him with a photographic record.

This smart looking E-Type V12 Roadster is fitted with automatic transmission and was sold new to America as a left hand drive example. The vendor acquired the car in Dallas, Texas, in 2015 and was told by the dealer he bought it from that it had been owned from new by a local Doctor, and they believed the recorded mileage of 78,000 was all the Doctor and his wife had driven in the car. It was brought to England and the former engineer vendor immediately commenced a restoration. The work was completed in early 2017 and is documented in a photograph album that shows the car as purchased in Dallas, and then in various stages of rejuvenation in England. The restoration included various light body repairs, some new floor sections, a repaint, new leather and carpets to the interior, and a new folding roof. Mechanical rejuvenation apparently included an overhaul of the differential, new brake and fuel lines, and a new brake servo all costing c.£31,000. As well as the photographic record of the works, there are many parts invoices on file. The number on the engine matches that displayed on the chassis plate, and the vendor describes the bodywork, paintwork, and interior trim as being in "excellent" condition. The E-Type has a current MOT until January 2018 and is ready to be enjoyed during the summer ahead. It is only being sold as the vendor is fortunate to have another E-Type V12 Roadster in his garage. Worthy of closer inspection.
Share: