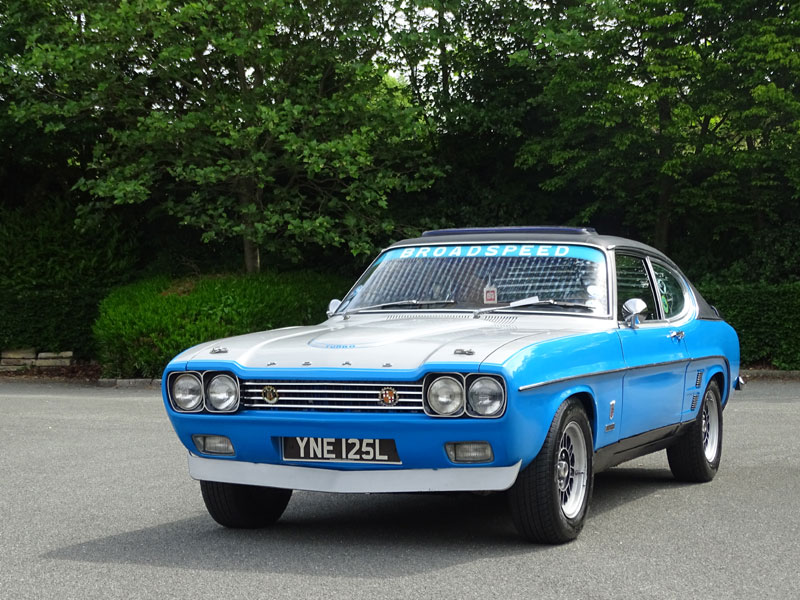 Inspired by the legendary Mustang, the Capri was Ford's European pony car and has a special place in many enthusiasts' hearts. With 138bhp on tap, the 3.0-litre versions of the MKI were quick cars, but a lot faster still when breathed on by one of the independent tuners of the period. Notable among these was Broadspeed who, based on their experience of preparing racing Escorts and Capris, offered both normally-aspirated and Turbocharged 'Bullit' Capris' for the road - the name was a nod to the legendary film Bullitt (with two Ts) and its Mustang-driving detective of the same name. It is thought only 15 Turbo variants were built, all of which were based on MKI 'Facelift' chassis, of which the sale car is one of only seven remaining, and the only left-hand drive example.

Manufactured at Ford's Halewood plant in December 1972, it was immediately converted by Broadspeed before being shipped to Spain, where it formed part of the company's 1973 Barcelona Motorshow display. It then passed into the hands of Spanish racing driver Rafael Barrios before acquiring owners in Madrid and Coruna. After a period of storage following a minor accident it was acquired by Garcia Autos of Lugo, from whom the vendor purchased it in 2007. It was granted the UK registration 'YNE 125L' in July 2008; the same year it featured in Retro Ford magazine alongside 'EPY 302L', the oldest Turbo Bullit.

Understood to have driven just 30,000 kilometres from new, this rare Fast Ford has never been restored, yet remains resplendent in its original livery of Monza Blue and contrasting bonnet, and is currently considered by the vendor to have 'excellent' bodywork, Tan vinyl/cloth interior trim, 3.1-litre V6 engine and four-speed manual gearbox, and 'very good' paintwork. It comes complete with rear window louvres, boot spoiler and MOT.
Share: