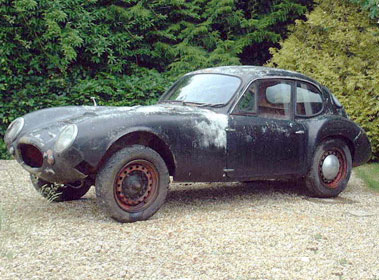 In the 1950s when new cars were scarce and young men could only afford worn-out pre-war saloons, a new industry grew up in the UK to help them build 'Specials' based on ancient chassis, supplying tuning equipment, modified suspensions and running gear and adventurous sporting bodywork to turn an Austin Seven, Ford Pop or whatever into a racy-looking sports job. Some of the results were frankly abysmal, but with the right special equipment and an attractive, well-assembled body, you could turn out a potent and fun sports car. A great deal of Britain's world-leading racing car industry today can be traced back to the Specials era. Rochdale Motor Panels was early on the scene with aluminium, then glassfibre bodies to suit various chassis. Buying in the innovative Bonglass design (its designer had been head-hunted by Jaguar to produce a glassfibre monocoque D-type) showed them the way forward: it featured inner wheelarches, bulkhead and part floor sections so it would bolt easily onto a Ford Pop chassis. Brilliant young designer Richard Parker on his summer vacation in 1956 was given the task of making a GT body using the Bonglass principles and based on Rochdale's pretty F-type open body. The result was the GT, Rochdale's most successful model of which some 1350 were sold between June 1957 and the factory fire of February 1961. One of the most sophisticated bodyshells of the time, it was relatively easy to fit and included such advanced features as a curved windscreen, wind-up windows and opening quarterlights - cleverly incorporating Morris Oxford and Minor parts.

Young Brian Hutton, who spent almost two years putting this one together, went to tremendous lengths to ensure his was among the best. Starting in August 1958 with a new, boxed, Ford Pop chassis, he painstakingly built-up a rolling chassis with almost all new parts - bills for parts alone total well over £400. The factory recon engine was treated to Aquaplane valve springs and engine bearer, Rochdale header tank, split radiator and side-mounted dynamo; LM Ballamy Supersprung independent suspension took care of the front end, Buckler D/W close ratio gears, 15in wheels and a high-ratio axle ensured lively performance and relaxed cruising and other attention to detail included an MGA fly-off handbrake and comprehensive instrumentation (specially calibrated Smiths speedometer and matching rev counter). Hutton drove the car until 1966, when it headed to the West Country, passing through four more owners before landing in Carn Bosavern Garage, Cornwall, with a worn-out engine. It was purchased from there by Aston Key, who kept the car for 30 years before passing it, still unrestored, to the vendor in 2003. Much work is required, but the brave restorer will be rewarded with a well-sorted Ford Special with complete history that is still very much in original spec.