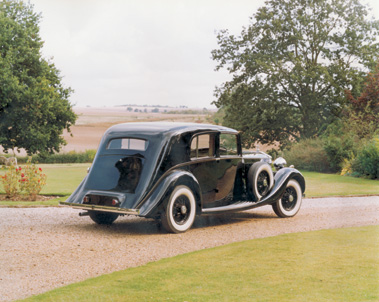 First launched in 1925, the Rolls-Royce 40/50 was sufficiently different from the Silver Ghost to warrant a new name, the New Phantom, which after successive versions appeared became the Phantom I. After 2212 Phantom I sixes were built, the Phantom II replacement appeared from 1929. By the 1930s, however, 12-cylinder competition from rivals Daimler, Hispano-Suiza, Packard and Lincoln, not forgetting a V16 from Cadillac, had forced R-R into the 12-cylinder sector with a 1935 Olympia Show launched Phantom III with V12 engine, 710 being made by 1939.
Phantom III chassis 3BU 194 left the Derby works in 1937. First equipped with coachwork by Vesters and Neirinck (as confirmed by chassis number listing in Lawrence Dalton's definitive guide as having been thus bodied), it is believed that early in its life the formal saloon with division bodywork currently fitted, which is thought to have been crafted by Barkers, was added.
According to the vendor, the Phantom was delivered new to the Mayor of Brussels. Following importation from the USA, it has been stored for over ten years. Although this very elegant motor car will need some recommissioning following storage, chassis and coachwork are described as good. Apart from light microblistering to one wing, the black paintwork is reportedly otherwise good, whilst the beige interior is still good for its age. The 7.3-litre twelve is claimed to be in running order, the electrical equipment serviceable and the 4-speed manual gearbox believed good.
Share: