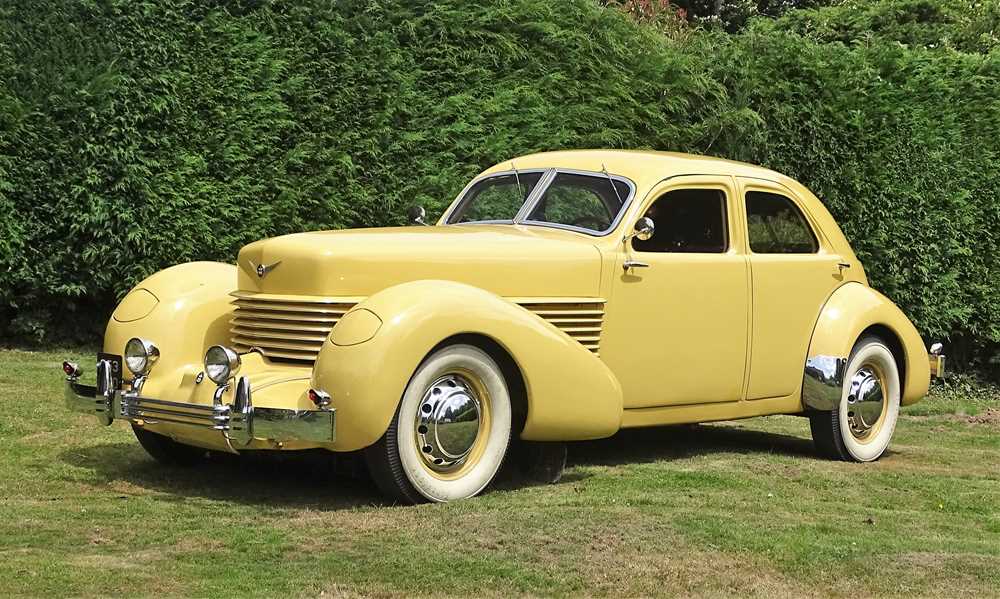 We are indebted to the Vendor for providing the following information :

" This Cord was manufactured in 1936 and remained in the USA until 2008 when purchased by a Swedish collector and shipped to Sweden. This owner completely stripped the car for renovation . The bodywork was taken back to bare metal for a respray and the engine and gearbox were both stripped for rebuild. The engine being rebuilt by one of Swedens top engineering firms. There is an accompanying folder with receipts for parts and work carried out over the six year period of rebuild. The present owner purchased it in 2016 and imported it to England. It was assigned an age- related number by the DVLA but this was changed to a more fitting private number by the present owner. This number remains with the car , 254 COO.

Since being in the present ownership it has only been out for his Daughters wedding and a handful of other occasions. The mileage covered being less than 1000 miles. It remains in stunningly beautiful condition. With the car there is a comprehensive photographic record of the restoration , a file of receipts , service manual and owners manual."

One of the few automobiles deemed worthy of inclusion in the Museum of Modern Art in New York, and arguably the most easily recognised American car of all time, the Cord 810 debuted in November 1935, receiving a rapturous reception at US automobile shows. The work of a team headed by Duesenberg designer Gordon Buehrig, the 810 body style with louvred 'coffin' nose, streamlined, spat-shaped wings and absence of running boards would prove immensely influential, its distinctive features being borrowed by most mainstream manufacturers by the decade's end.

The 810's arrival marked the end of a hiatus in Cord production, its predecessor - the L29 - having disappeared in 1931. Errett Lobban Cord had introduced the L29 in 1929 as a gap-filling model priced between his Cord Corporation's Auburn and Duesenberg lines. Powered by a Lycoming straight eight, the Cord L29 featured front wheel drive, then in vogue at Indianapolis. Its front-drive layout made for a low-slung frame, and the freedom this gave coachbuilders meant that the Cord was soon attracting the attention of master craftsmen on both sides of the Atlantic.

Front-wheel-drive like the L29, the 810 differed from its predecessor by virtue of its more compact Lycoming V8 engine and four-speed, pre-selector gearbox. Set further back in the chassis, the former endowed the 810 with better balance and came with 125bhp in standard trim or 170bhp when supercharged. Custom sedans on a longer wheelbase joined the four-model 812 range for 1937, though it is doubtful whether any independent offering ever matched Buehrig's original Beverly fastback sedan for sheer style. Priced competitively in the $2,000-3,000 range, the 810/812 should have been a huge success, though, sadly, this was not to be. The Cord Corporation was in deep financial trouble, and when its proprietor sold up in August 1937, it spelled the end not just for Cord, but for Auburn and Duesenberg as well.