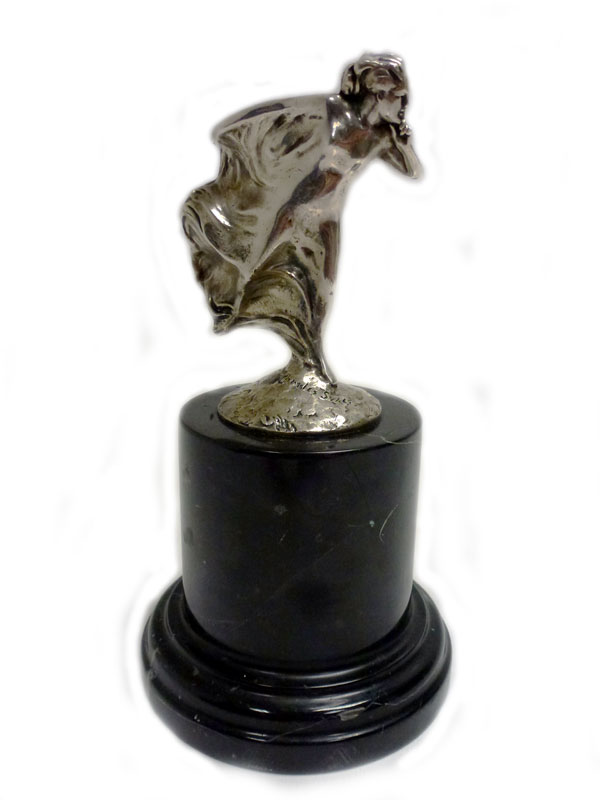 Unlike anything we have ever encountered, this example of the famous 'Whisper' mascot, features a large flat deskpiece-type base, clearly signed by Charles Sykes and is mounted to a very large marble display base. Edward Scott-Montagu, the second Lord Montagu of Beaulieu, commissioned his friend Charles Sykes to sculpt a personal mascot for the bonnet of his Rolls-Royce Silver Ghost; Sykes chose Eleanor Thornton as his model, her being the secret love & secretary of Lord Montague. Sykes set about crafting the figurine of her in fluttering robes, pressing a finger against her lips, symbolising the secrets of their love. The figurine was consequently christened The Whisper & was reputedly optionally fitted to other 40-50HP Silver Ghost cars of the c1911 - 1914 period. This example, is believed to be one of a small selection made before WWII to decorate the European showrooms. Signed to the base and offered in excellent, well-preserved condition. This striking nickel-plated piece is believed to have been on display at the famous Rolls-Royce Conduit Street, London Showrooms until the 1960s. It was later in the magnificent Collection of the well-know RREC Member and Welsh TSB Section chairman, the Late Brian Corser until his sad passing in the 1990s. The recently deceased Lord Montagu of Beaulieu had a similar, slightly larger example of this piece on display in his London apartment.
Share: