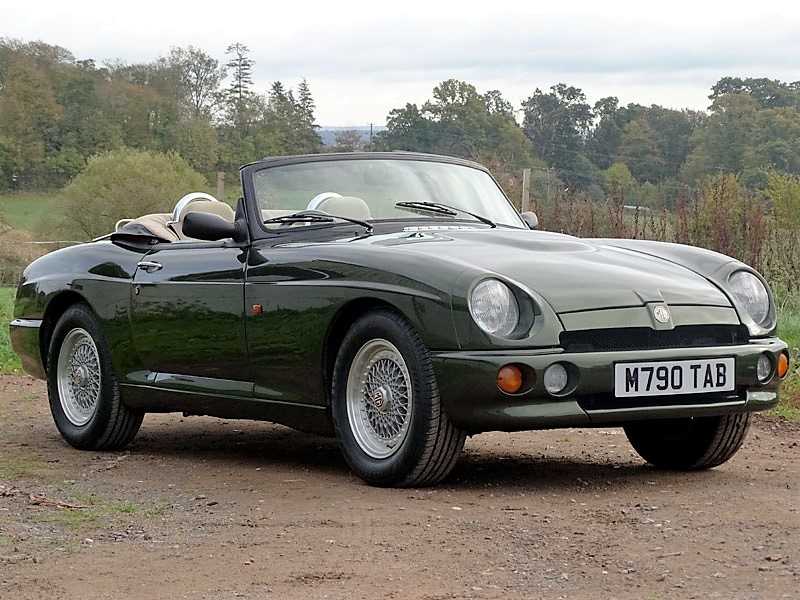 Launched at the 1992 Birmingham Motor Show, the RV8 signaled MG's return to the open sports car market. Just as the Cobra grew out of the less muscular AC Ace, so the RV8 evolved from the immortal MGB Roadster (hence the car's 'Project Adder' development code). Built around a thoroughly re-engineered and neatly restyled version of its predecessor's monocoque bodyshell, it was powered by a 3948cc V8 engine that developed some 190bhp and 318Nm of torque. Said to be capable of 135mph and 0-60mph in 5.9 seconds, the adoption of telescopic shock absorbers and anti-roll bars all around brought a notable improvement in handling. Trimmed to a high standard, its inviting interior boasted leather upholstery and rich wood veneers. Just 307 of the 1,982 cars made were UK-supplied (the majority going to retro hungry Japan).

This RV8 was originally registered overseas and is understood to have covered less than 20,000 miles from new. Finished in BRG with beige leather, it benefits from the fitment of Spax adjustable front struts, Hoyle independent rear suspension, and a battery isolator switch. Imported to the UK in 2005 and clearly the subject of much previous expenditure, this collectible MG comes with Swansea V5C and is expected to possess a fresh MoT by the time of sale.