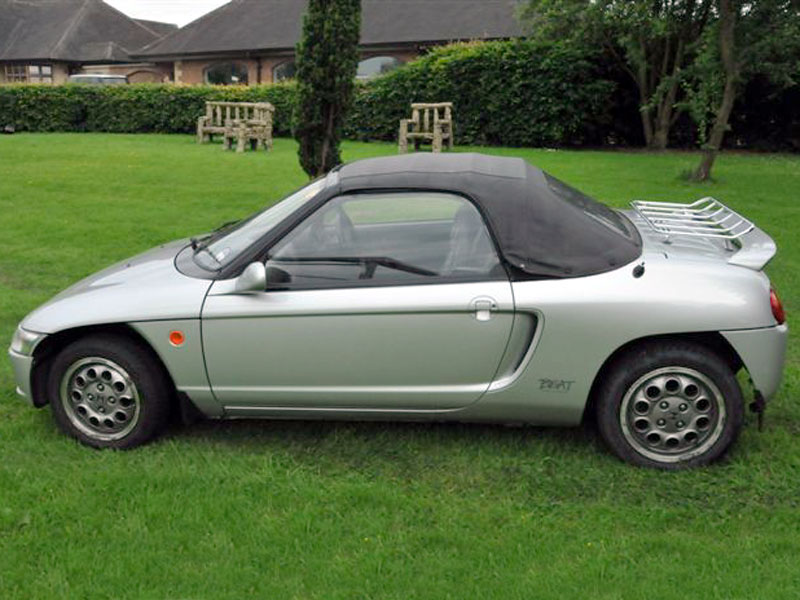 The Beat was launched into Japan's Kei-jidosha or microcar class in May 1991. Eligible for domestic tax concessions by virtue of its compact dimensions (2280mm wheelbase, 1210mm track) and miniscule 656cc powerplant, it was billed by Honda as the world's first mass-produced, mid-engined, open monocoque. Reinforced with sturdy crossmembers, double skinned sills and a hefty central tunnel section, this unique platform was equipped with all round independent coil-sprung suspension, disc brakes and sharp rack-and-pinion steering. Though the three-cylinder, 12-valve engine is tiny, its Multi Throttle Responsive Engine Control means it punches above its weight to produce an impressive 64bhp and 44lbft of torque, allowing 0-60mph in 9.8 seconds if you use all 8000rpm, with an electronically limited 87mph top speed. Boasting electric windows and air conditioning as standard not to mention the potential for spectacular fuel economy, the characterful Honda became an instant cult classic after it was phased out of production in February 1996.

The eagle-eyed among you will have spotted that this particular example has only been in the current ownership since our June 9th 2010 Buxton auction. One of two cars purchased by the vendor's daughter that day, she has decided the other - a 1952 Willys Jeep - better suits her needs and hence the Honda is back up for sale. Reportedly treated to a cambelt change on 27th June 2006 at 81,585km, the diminutive two-seater is further understood to have covered just over 10,000km since then. Said to have required nothing beyond routine service parts during the three or so years it was with its previous keeper, the Beat was nonetheless fitted with a larger battery to compensate for being laid-up over winters and also to allay the fear that the alarm system would discharge and lose its code (though, the original battery fittings are included). Finished in silver with trademark 'Zebra' cloth upholstery, the Honda retains its original carpets and stickers. Boasting an easy to use and water resistant hood, this funky Beat is offered for sale with MOT certificate valid until March 2011.
Share: