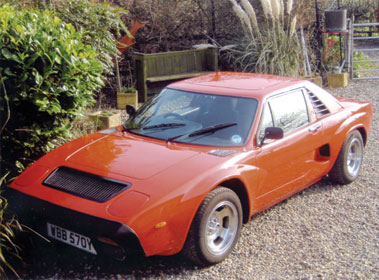 Although, the AC 3000 ME prototype debuted at the 1973 Earls Court Motor Show, difficulties in obtaining Type Approval meant that it would be another six years before the mid-engined sportscar entered production. Hailed as the British equivalent of the Lancia Stratos - both machines featuring wedge-shaped styling, fibreglass bodywork and proprietary V6 engines - its 'bathtub' steel chassis played host to substantial front / rear subframes and an integral roll-over bar. Equipped with all-round independent double-wishbone suspension, rack and pinion steering and four-wheel disc brakes, the model boasted a rearward 40:60 weight bias and excellent handling. Transversely mid-mounted, the 2994cc Ford powerplant was allied to AC's own five-speed manual gearbox (albeit with Hewland internals) via a Reynold triplex chain system. With some 138bhp and 192lbft of torque on tap, the lightweight 3000 ME (1085kg) was reputedly capable of 0-60mph in 8.5 seconds and over 120mph. Some seventy-six cars were produced at AC's Thames Ditton factory before manufacture switched to AC (Scotland) Ltd in 1984 where another thirty were built. For many the last true AC - and certainly the final model in which the Hurlock family had a hand - the 3000 ME has long been collectible.

Finished in red with black / red upholstery, this particular example is described by the vendor as being in "very good" condition with regard to its engine, five-speed manual gearbox, electrical equipment, interior trim and bodywork (while, he rates the paintwork as "good"). Reportedly "imported from Jersey with all taxes paid", the now UK registered AC is said to be "a lovely responsive car with strong engine and overhauled box". Apparently benefiting from "a new twin-choke Weber carburettor, replacement alloy rocker covers, reconditioned original wheels and five fresh tyres", the two-seater is also understood to have undergone "a brake system overhaul (new discs / calipers), interior ret-trim by Northumbrian Leather and suspension refurbishment". Stated to be among the last of the Thames Ditton built 3000 MEs and to have covered just 49,500 miles from new (a figure reputedly substantiated by the accompanying history / invoices), the taxed and tested `WBB 570Y' is currently being used for a sixty-mile daily commute.