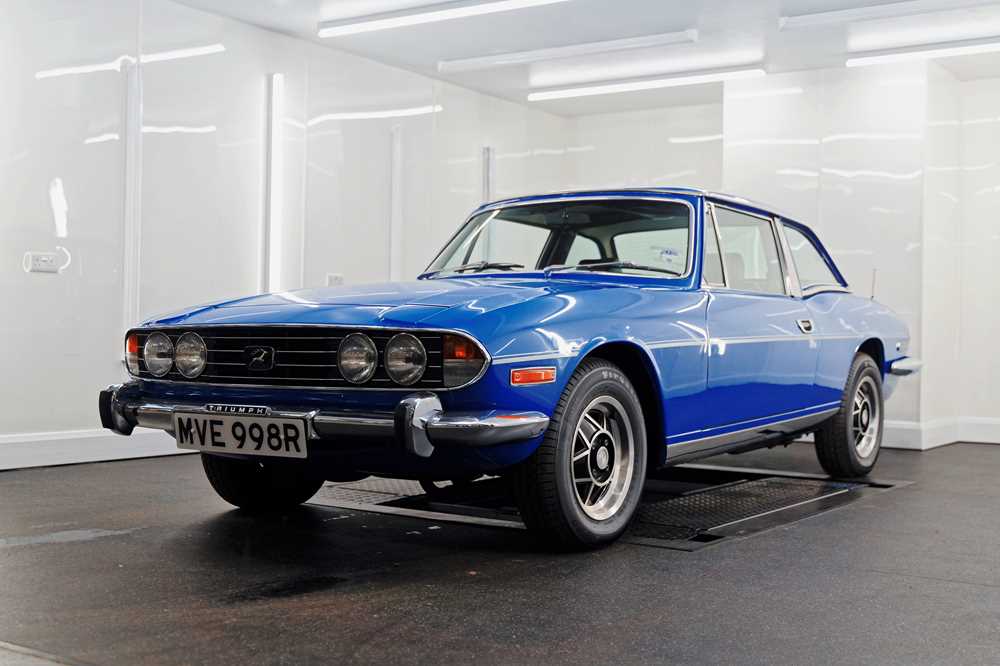 Introduced in June 1970, the Triumph Stag was conceived as a luxury convertible sportscar to rival the likes of the R107-series Mercedes-Benz SL. As such, it came equipped with electric windows, power-assisted rack and pinion steering and servo-backed disc / drum brakes as standard. Based around a two-door monocoque bodyshell (stylist Giovanni Michelotti had physically shortened a pre-production Triumph 2000 saloon in order to fashion the initial prototype), the newcomer featured all-round independent suspension (McPherson strut front / semi-trailing arm rear) and a well laid-out 2+2 cabin. Neatly integrated, the substantial roll-over hoop that joined the B-pillars gained extra strength from a T-bar link to the windscreen frame. With some 145bhp and 167lbft of torque on tap from its bespoke 2997cc SOHC V8 engine, the model was reputedly capable of 120mph. Available with a choice of four-speed manual or three-speed automatic transmission all but the earliest Stags benefited from both hard- and soft-top roofs. Despite being in production for seven years during which time 25,877 cars were made, a mere 9,500 or so are thought to have survived.

Retaining its original Passport to Service, this particular example has formed part of a private collection for the last twenty years or so. Finished in the handsome combination of Tahiti Blue with Black upholstery, the vendor purchased it from a fellow company director. Although, in good order he subsequently entrusted it to marque specialist MV Classics of Southampton for £10,000 worth of gentle restoration. Sparingly used since then – the past decade has seen it cover less than 400 miles – the Triumph remains highly presentable. Passing its most recent MOT test on 31st May 2022 with only one minor defect (a deteriorated suspension dust cover), the Stag is rated by the seller as being in ‘very good’ (bodywork, paintwork, interior trim) or ‘excellent’ (engine, automatic transmission, electrical equipment) condition. With its distinctive V8 woofle, crisp Michelotti styling and civilised road manners, Triumph’s flagship GT has much to recommend it.