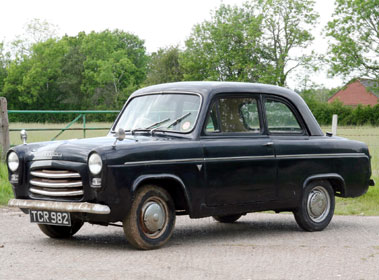 Ford introduced the 100E alongside the basic 103E Popular in 1953, the 100E offering modern styling and suspension on a four-seat saloon at an affordable price. Though frowned on by some for its sidevalve engine and three-speed gearbox, anyone who has driven Ford's sidevalve knows that it makes up in torque for what it lacks in revs against period rivals like A30s and Minors.
Kathleen and Harold McKay bought this Anglia de luxe - which enjoyed a quality feel with its full-width aluminium-trimmed dashboard and two-tone leather-faced seats - new in 1957 in anticipation of their son's wedding. It cost £632 from Percy Hendy Ltd of Southampton. Harold and his Anglia were inseparable until old age dictated gentle retirement, the Anglia - which was always garaged - ceasing use in 1981.

The car had covered c72,500 miles from new and the history file includes everything to verify that, from the original bill of sale to every MoT and almost every service - just a one-line listing of all the bills runs to three pages. It passed to his grandson, the vendor, in 1985 but sadly restoration never began.
Though some welding is needed underneath and an engine overhaul will be required, the car has always been dry stored and remains remarkably sound. It still runs and drives. Incredibly, the front seats have been under protective covers from new and have never yet been sat upon! This is a rare opportunity to acquire the most attractive and desirable of 100Es (two-door, three-bar grille, slim bumpers, full-width dash and de luxe trim are a seldom-seen combination) with just one family ownership from new and full history.
Share: