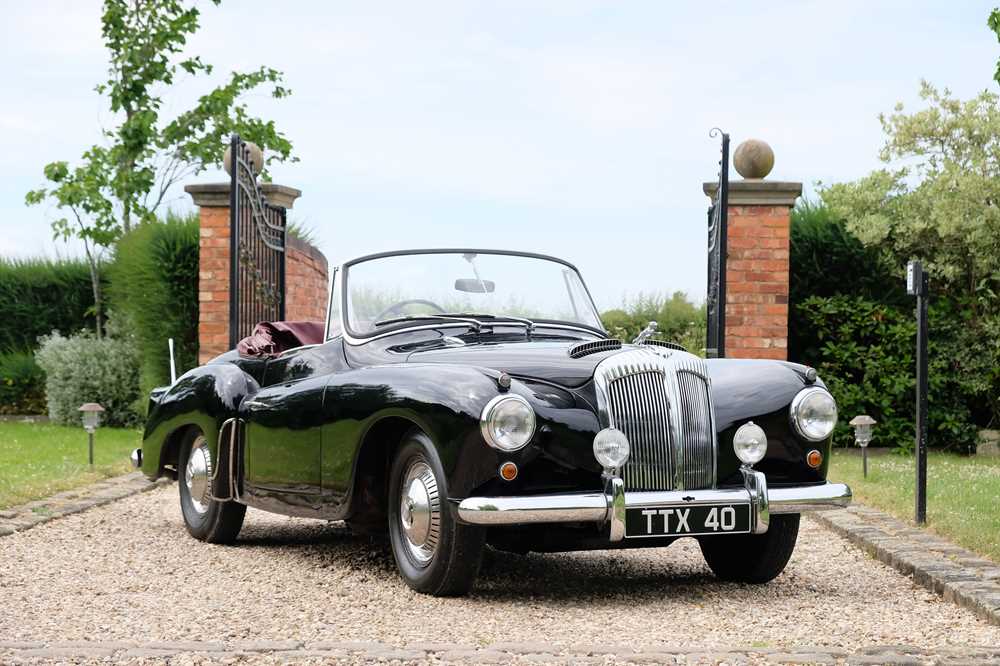 In the postwar years Daimler were keen to enter the sports car market and wanted to compete with the likes of the Jaguar XK120. In June 1953 a pre-prototype Conquest Roadster 2-seat sports based on a Lanchester design was produced. It was powered by a specially tuned 100 bhp twin carburettor version of the Conquest engine and was a sensation at the 1953 Earls Court Motorshow. The prototype of the ‘’New drop head coupe’’, with the famous third seat sitting sideways behind the driver, was presented at the 1955 Earls Court show and was presented with a Coachbuilders Gold Award. The new Drop Head Coupe were all handbuilt and consequently so expensive that only 54 were built between 1955 and 1957.

Manufactured in 1956 and delivered new via Horsmith Motors in Cardiff, TTX 40 retains its original registration and is presented in black with contrasting red leather interior and matching hood. Already rare, this particular example is made even more special being chassis number 2 and the sole model fitted with a BorgWarner automatic gearbox from new, factory electric windows and one of two with twin aerial masts on the rear wings. TTX 40 is prominently mentioned in the Book of the Daimler Conquest - Roadster and New Drop Head Coupe.

TTX 40 was acquired by its current owner in 2018 and subsequently was subject to a mechanical recommissioning at a cost of over £4,000. The vendor rates the condition of the bodywork, engine, electrical equipment, transmission and gearbox and interior trim as ‘Very Good’ with the paintwork ‘Good’. Included in the history file are a collection of invoices for work completed, with most dating back to 2018, communication between owners and the Daimler and Lanchester Owners Club including a number of photographs of the vehicle and a collection of informative information. Please note that the petrol gauge is intermittent.