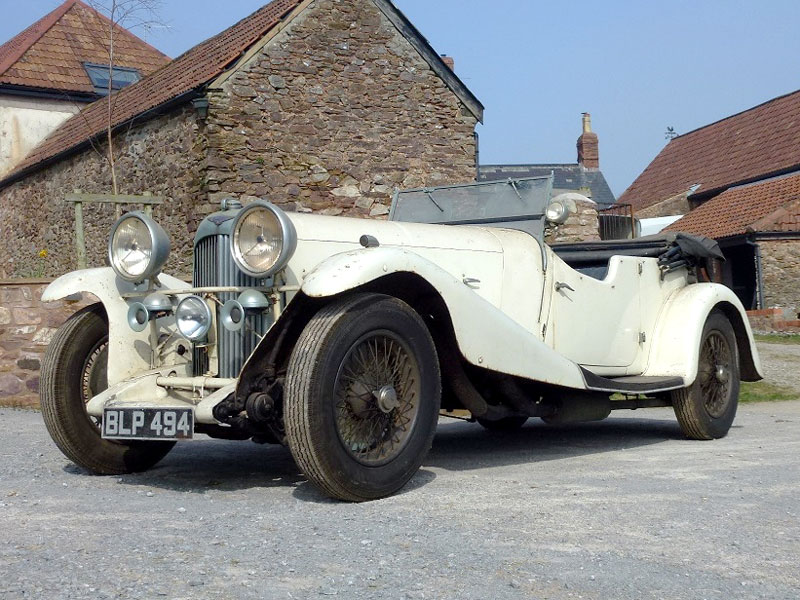 One of just ten surviving M45 T8 Tourers known to the Lagonda Club, chassis Z11251 was supplied new to W. Melveston Esq. of Addison Road, W14 (which still ranks among London's most expensive and sought after addresses). Road registered as `BLP 494' on 21st December 1934, the four-seater had passed to accomplished racer Walter `Wal' Handley by the decade's end. A Manx specialist whose four IOM TT motorcycle victories resulted in a corner of the famous course being named after him, he was briefly scheduled to drive for Lagonda at the 1928 Le Mans 24-hours and later piloted a variety of exotic four-wheelers including an Alfa Romeo 8C, MG K3 and several Rileys. A friend of Freddie Dixon and George Eyston, Handley is understood to have lent `BLP 494' to the latter for a diesel engine test (Eyston being involved in various diesel-powered speed record attempts at the time). An accompanying continuation buff logbook issued to John Ernest Marsden Esq. of Ealing on 20th September 1951 quotes the Lagonda's engine number as 3001 which suggests that the Tourer had been reunited with its factory-fitted powerplant during the immediate pre- / post-WW2 period. Apparently raced at Silverstone by next keeper Ronald Albert Newman of London W6, the M45 then passed through the hands of Alan Jeremy Sumner of Weybridge and David Randolph Hine of Alderley Edge before entering the current family ownership on May 30th 1967 for the princely sum of £969 18s 0d.

A letter on file from Mr Hine (the current Lagonda Club president) reveals that during his stewardship `BLP 494' became `well known in the Lagonda Club due to successful participation in driving tests, rallies and concours d'elegance events'. He goes on to recall that `each winter I laid the car up to overhaul some aspect of its construction. In 1965 the car was given to Thompson-Doxy Ltd of Southport who completely checked, repaired and then repainted the bodywork in ivory. In 1964 an engine was obtained from Gardner Diesels Ltd - they had removed it from a Lagonda in 1936 and kept it in storage ever since. This engine is now in the car and has done less than 25,000 miles since new. Most of the chromium plating has been renewed and the interior leatherwork has been refurbished. Where necessary the electrical system has been rewired and the wheels have been reset and enamelled dark blue. A replacement gearbox has been fitted to the car and the back axle was overhauled in 1964. Other items include new shock absorbers, replacement carburettors from SU, new dashboard and a new radiator'.

Last on the road approximately thirty years ago, this ultra rare and exciting `barn find' is offered for sale with V5 Registration Document, Continuation RF60 logbook, assorted MOT certificates, sundry invoices / correspondence and a copy of the 4 ½-Litre Lagonda Profile Publications booklet which states that its modified tail and Rapide-style exhausts date from 1937.

H&H are indebted to Arnold Davey, John Sword and David Hine for their kind assistance in researching the car's history.

PLEASE NOTE: As was the case for all Lagonda M45s, this lot was originally fitted with a 4.5 Litre six-cylinder petrol engine. It is understood to have had a diesel engine installed whilst on loan to George Eyston but to have returned to petrol power thereafter. Gardner Diesels Ltd are known to have acquired several Lagondas for use as mobile test beds (their original petrol engines being supplanted by Gardner's own diesel designs). The engine currently fitted to `BLP 494' is a correct-type 4.5 Litre straight-six petrol powerplant that was surplus to Gardner's requirements when David Hine acquired it in 1964.
Share: