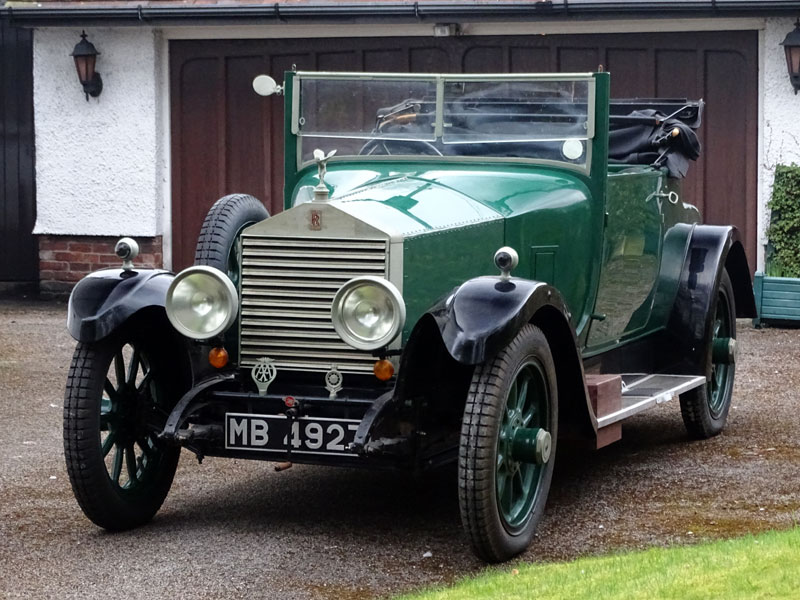 'MB 4923' was supplied new to an E. L. Bilston of Cheshire in 1924. At that stage it wore a Touring body crafted by the Liverpool firm of coachbuilders, William Watson. The current Doctor's Drophead Coupe coachwork was fitted many years ago and the whole car subsequently treated to a 3,000 hour restoration. During the refurbishment the body was removed, the chassis overhauled, and the engine and its ancillaries rejuvenated, painted and detailed. The suspension, brakes, steering and wheels all also received attention as required and the following were renewed - Wefco spring gaiters, exhaust system, tyres and inner tubes.

The body frame was checked and new timber sections inserted where necessary. The panel-work was stripped to bare metal and replacement wings, valances, door panels and battery box crafted using the original items as patterns. The parts were then reassembled prior to painting. The running boards were recovered, a new mahogany toolbox affixed to the nearside one, and new dashboard and walnut door trims fitted before the interior was reupholstered in Green Connolly hide and contrasting Green carpets installed. The body is still resplendent in a Green and Black livery that's complemented by a Black-coloured duck hood and re-plated nickel brightwork. The vendor's family has owned the Rolls since October 1989 and we are told that it was 'a delightful car which drove and performed splendidly' before being laid-up some time ago.

Unveiled in 1922, the 20HP was a shorter, more economical sibling to the Silver Ghost, which broadened the marque's reach to include the very rich as well as the seriously wealthy. Instantly distinguished by its horizontal radiator shutters, the newcomer was constructed around a ladder-frame chassis of 129 inch wheelbase. Power came from a 3127cc straight-six engine.
Share: