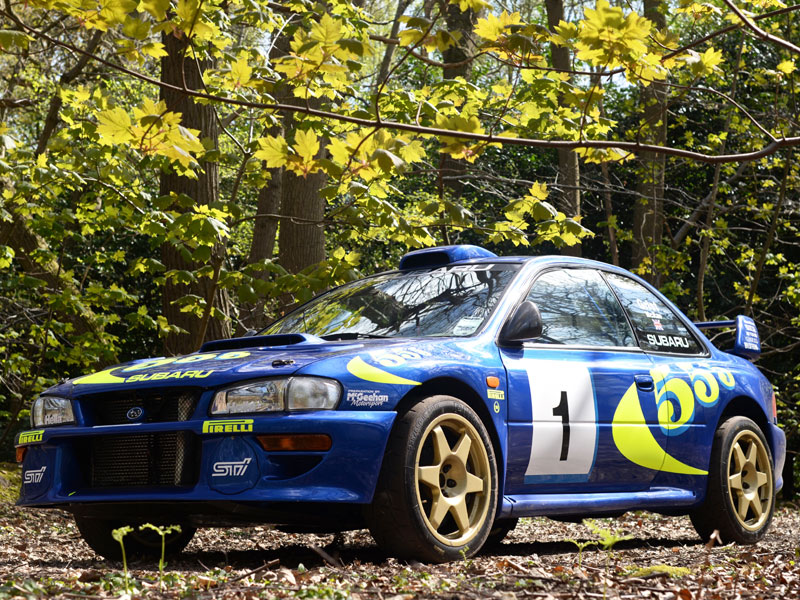 'As far as historic rally cars go, Subaru Impreza WRC97001 is one of the most important ever made' (David Lilywhite - Octane magazine, May 2010)

'To many, the mid 1990s was the heyday of the Subaru World Rally Team. Following the drivers' and manufacturers' double in 1995 and a further manufacturers' title in 1996, the blue and yellow Impreza was rapidly becoming the icon of the championship and Colin McRae one of rallying's great stars.

1997 brought in a new era in the World Rally Championship, with the introduction of the appropriately named World Rally Car formula. While some continued to compete with what were predominantly modified Group A cars, the new FIA regulations provided an opportunity to bring new manufacturers into the championship, who otherwise were unable to homologate suitable road cars.

At Prodrive we seized the opportunity, and while our Group A Impreza was already very competitive, we went back to the drawing board to develop a new two door Impreza World Rally Car from scratch.

The engineering team, led by David Lapworth, spent 1996 developing the new car, and by the last event of the season, Rallye Catalunya, we were able to unveil our new car to the world's press. Whilst at this very same event, Colin McRae gave the Impreza Group A a fitting send off by winning the Spanish rally and clinching a second manufacturers' title for Subaru.

Chassis 001 was the car we unveiled and used as our primary test and development car. It was thanks to the many hours Colin and the other drivers spent at its wheel, that when it came to the car's debut at Rally Monte Carlo in January 1997, Piero Latti was able to claim victory and help Subaru go on and win a third consecutive manufacturers' title' (David Richards - Prodrive, 2009)

Taking full advantage of the new WRC rules, Lapworth and his team liberated considerably more power and torque from the Impreza's force-fed 1994cc engine but without sacrificing reliability. Occupying almost an entire inner wing the newcomer's huge airbox was complemented by a similarly enlarged intercooler that sat in front of, rather than atop, the charismatic flat-four thus minimising heat soak. The turbocharger itself was little altered but revised inlet / exhaust systems saw outputs increase to 300bhp and 347lbft of torque.

The adoption of a two- rather than four-door bodyshell brought a notable increase in torsional rigidity as did the use of CAD to optimise the form and positioning of the integral rollcage (each monocoque took over 600 hours to reinforce / prepare), while the new regulations also allowed the McPherson strut suspension to have longer travel. Less reliant on computer control than its successors, the WRC97 fed power to all four wheels via a six-speed manual gearbox and front / centre / rear differentials. Styled by Peter Stevens of McLaren F1 fame, the car's blistered wings, front / rear spoliers, side skirts and even door mirrors were all wind tunnel-honed to maximise their aerodynamic efficiency. Hailed by Colin McRae as 'quick straight out the box and generally a bit better in every way as well as faster' than its Group A predecessor, Chassis 001 paved the way for its WRC97 sister cars to claim 119 stage wins and eight out of the fourteen World Rally Championship rounds between them.

The eWRC-results.com website records Chassis 001 winning the 1998 Boucles de Spa Alphonse Delettre Rally in the hands of Gregoire de Mevius / Jean-Marc Fortin before being sold to Procar of Italy. Seemingly victorious on the Rali Vinho da Madeira, Rally Cyprus and Aviano Rally in 1999 that same year apparently saw it piloted by none other than nine-time motorcycle champion Valentino Rossi to eighth place on the Rally di Monza.

The Subaru's accompanying FIA World Rally Car Technical Passport reveals that it contested the 1999 Acropolis Rally and 2001 Swedish Rally but retired from both due to mechanical failure. Driven on the latter event by Tomas Hrdinka / Petr Gross under the Styllex Tuning Prosport banner, the Impreza subsequently carried the duo to a handful of victories and podium placings. Rallied extensively in Ireland from 2002 - 2007, Chassis 001 proved competitive into its final season.

Initially road registered as 'P555 WRC' (and tested in Spain by McRae right after the Rallye Catalunya with that plate on) but better known by its long-term moniker 'P18 WRC', the car had been given a superficial cosmetic refurbishment prior to entering the current ownership. Drawn to 'first editions', the previous keeper not only had Prodrive validate Chassis 001 but also commissioned them to restore it to 'original' condition (becoming the Banbury outfit's first heritage customer in the process). The car was renovated using only original SRT parts, many of which would be even more difficult to source today.

Overseen by Prodrive sales manager Steve Smith and documented in an accompanying hardback book, the resultant rejuvenation remains highly impressive and a real credit to David Richards and his team. Acid dipping revealed that Chassis 001 had endured a busy rally life but amazingly still retained its original Prodrive bodyshell, which was painstakingly repaired by the same team who had fabricated it in 1996!

Kevin Locke rebuilt the flat-four with a new stock closed-block and internals, plus the difficult to find SRT exhaust manifolds, after which it was set-up to run on super unleaded via a revised engine management map and suitable dyno testing. Fellow Prodrive staffer Darren Pentley overhauled the complete transmission and then tested it on Prodrive's unique transmission dyno before sign-off.

The vendor sums up 'P18 WRC' as follows: "It's a truly exhilarating car to drive with levels of grip and handling that would still embarrass many a modern supercar. Plus it runs on high octane pump fuel. It's doubtful that there will ever be another Subaru rally car from the same period restored like this one if only because the correct SRT parts are so difficult to locate. Pattern parts might be produced in time but Chassis 001 is the real thing"

We can only echo his sentiments and invite you to buy an important part of motorsport history. A period film presented by Tiff Needell which chronicles the development of Chassis 001 can be viewed at https://www.youtube.com/watch?v=aUZ0v80nzys
Share: