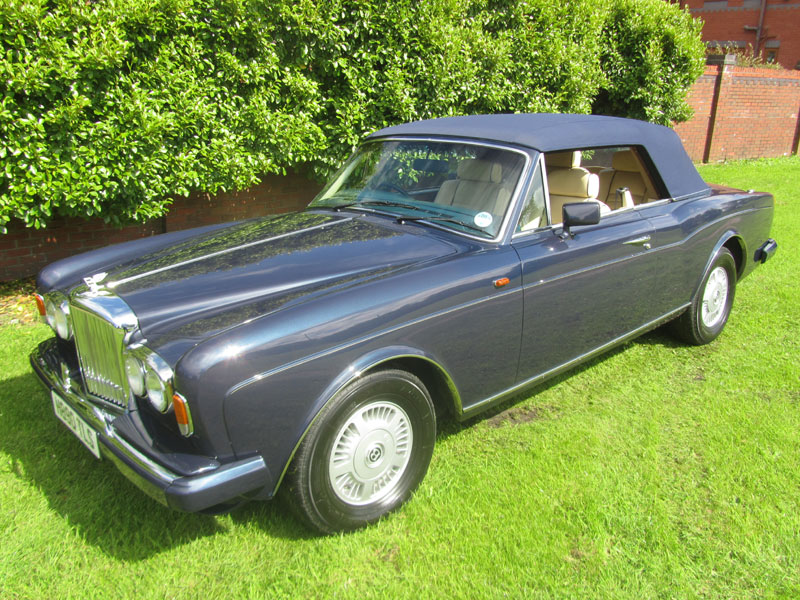 The first production Rolls-Royces and Bentleys to bear the Corniche moniker were the Coupe and Convertible versions of the Silver Shadow/ T-Type of 1971. In common with the Saloon, they were penned in-house by John Polwhele Blatchley and the underbody and floorpan crafted by Pressed Steel Fisher. Power was provided by the company's venerable all-alloy 6.75-litre V8 mated to a GM Turbo Hydramatic 400 three-speed automatic transmission. Suspension was independent by coil springs all round, augmented by a Citroen-originated hydraulic self-levelling system. Braking was by discs, with ventilated units being phased in for 1972. Though not immediately dubbed as such, the Series II version of the Corniche arrived in 1977, bringing with it rack and pinion steering and alloy and rubber bumpers. On a mission to restore some individuality to the marque, Rolls-Royce changed the moniker of the Bentley Corniche to Continental in 1984. The Series III derivative followed five years later, bringing new alloy wheels and the provision of air bags as standard. The bumpers were now colour keyed and the suspension updated once more.

The right-hand drive Bentley Continental Convertible being sold is an August 1990 example finished in Indigo Blue Metallic complemented by Magnolia hide upholstery. The vendor considers it to be "good" or "excellent" in all respects and is offering it compete with full dealer history that contains stamps from Evans Halshaw, Jack Barclay, Murray Motor Company, H R Owen, Frank Dale & Stepsons, RR&B Services and Gallimore Motors, all of which support the indicated mileage of 89,000 and the fact that 'H890 TLS' was not used between August 2007 and March 2010. A new mohair hood was fitted by Frank Dale in the last few years, who also carried out the most recent service in June, the Bentley comes complete with correct specification Blaupunkt Bamberg stereo, many old MOT certificates and one valid into June 2013.
Share: