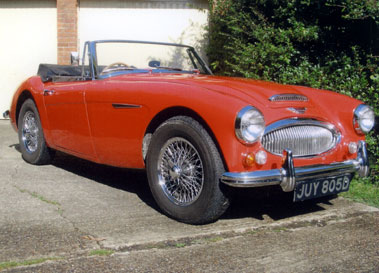 Introduced in 1964, the 3000 MKIII BJ8 was an altogether more refined creature than its 100/4 ancestor. Equipped with a centre console, proper convertible hood, wood veneer dashboard, redesigned exhaust system and wind-up windows, it proved a comfortable and fast grand tourer. With 148bhp and 165lbft of torque on tap from the 2912cc OHV straight six engine, its reputed 124mph top speed was accessed via a four-speed plus overdrive manual gearbox. Last of the line, the Phase Two variant benefited from redesigned rear suspension, strengthened splined hubs and larger diameter front disc brakes.

Finished in red with black leather / vinyl upholstery, this particular example is described by the vendor as being in "good" condition with regard to its engine, gearbox, electrical equipment, interior trim, chassis, bodywork, paintwork and wheels / tyres. Though, he notes that there is "some minor paint bubbling at the bottom of the door". A genuine home market car (as authenticated by an accompanying BMIHT certificate), 'JUY 805D' is believed to have covered some 16,000 miles since undergoing an extensive professional restoration in approximately 1989. More recently treated to an 'as new' tonneau (2005) and fresh battery (August 2007), it is said to have "just returned from a trouble free trip to Holland". Apparently showing "60+psi oil pressure on start up" and "40psi when hot" the engine boasts electronic ignition but is understood to suffer from "the usual Big Healey crankcase oil seal leak". Riding on chrome wire wheels, this sought after MKIII BJ8 is offered for sale with fourteen previous MOT certificates, restoration photographs, radio cassette player (in situ but not connected) and MOT certificate valid until July 2008.