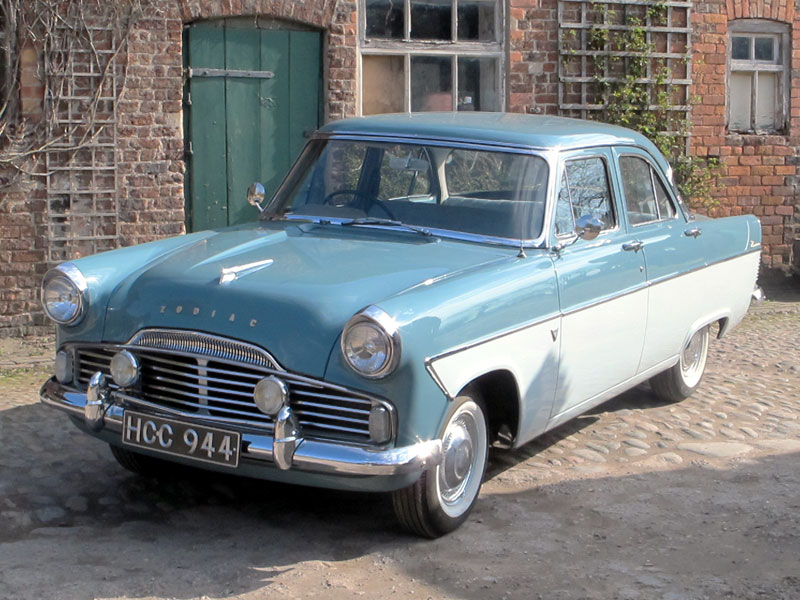 The Zodiac name was first seen on a Ford at the 1953 Earls Court Motor Show. From day one it denoted the top of the range model - above its siblings, the Consul and Zephyr. The trio were completely restyled in 1956, and the much bigger glass area, tail fins and optional two-tone paint schemes had a heavy American influence. The newcomers were quite a bit larger than their predecessors, with the wheelbase increased by 3 inches to 107 inches and the overall width stretched to 69 inches. With bench seats front and rear, these Fords would comfortably seat up to six adults and had boots to match. The six cylinder in-line engines of the Zephyr and Zodiac were increased in capacity to 2553cc to give an output of 86bhp. This was sufficient to allow a 0-60mph time of 17.9 seconds and a top speed of almost 90mph - lively performance for a largish family car of the period. The engine was either paired with a three-speed, column-change manual gearbox (for which overdrive was an option) or a Borg Warner automatic unit. Suspension was independent at the front with MacPherson struts and coil springs and a live axle at the rear suspended on semi-elliptic leaf springs. Braking was initially by drums all round, but front discs became optional in 1960 and standard the following year. The Mark II reigned for six years, during which time 294,506 Zephyrs and Zodiacs were produced.

The right-hand drive MKII Zodiac being offered is a two-tone Blue example (Shark and Pompador) with Pale Blue interior and was manufactured in 1960. It features the manual gearbox without overdrive. It is a striking looking car that the vendor regards as having "excellent" bodywork, paintwork, trim, engine and transmission. We understand the Ford has recently benefited from new carpets and seat belts.

PLEASE NOTE: The MOT for this vehicle expires April 2012.
Share: