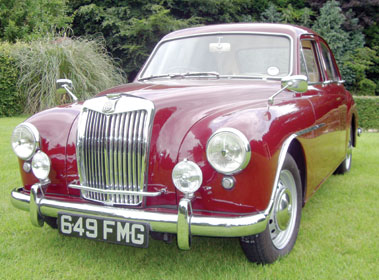 Reviving a name from the company's past, MG introduced the Magnette ZA at the London Motor Show of 1954. Though somewhat Italianate in style, the car was in fact penned by Englishman Gerald Palmer, who had previously made his name with the characterful Jowett Javelin. Power came from the then new 1.5-litre BMC B-Series engine which, topped by a pair of 1.25in SU carburettors, delivered 60bhp and drove through the rear wheels via a four-speed manual gearbox endowed with synchromesh on the top three ratios. The suspension was independent at the front using coil springs, while the rear featured a `live' axle supported by semi-elliptic leaf springs. Steering was by rack and pinion and the car had 10in drum brakes all round. The interior was typical of quality British cars of the time and featured leather trimmed seats and polished wood fascia and door cappings. A heater was included in the price but a radio still only an option. The standard car had a top speed of around 80mph, would hit the 60mph mark from rest in some 23 seconds and could return 25mpg.

The example on offer is not a standard car. Professionally restored in 1997, it was equipped with a freshly overhauled 1.8-litre MGB engine coupled to the appropriate four-speed gearbox with overdrive unit, while the front drum brakes were replaced with servo-assisted disc ones in order to manage the increase in power. At the same time, we are informed that "the body was treated to a bare metal respray inside and out in dark red, all chrome and wood items were restored to better than new condition, the interior was re-upholstered in beige leather and the floor fitted with new red carpets". In the same ownership for the last 20 years, this interesting MG has apparently covered very few miles since its major rebuild. Reputedly never stored outside, the owner describes the car as "an honest and sound example just waiting to be cherished by a new owner". It is MOT'd and taxed until March 2010 and sounds as though it should provide fast, fun, reliable transport to classic car meetings for years to come.
Share: