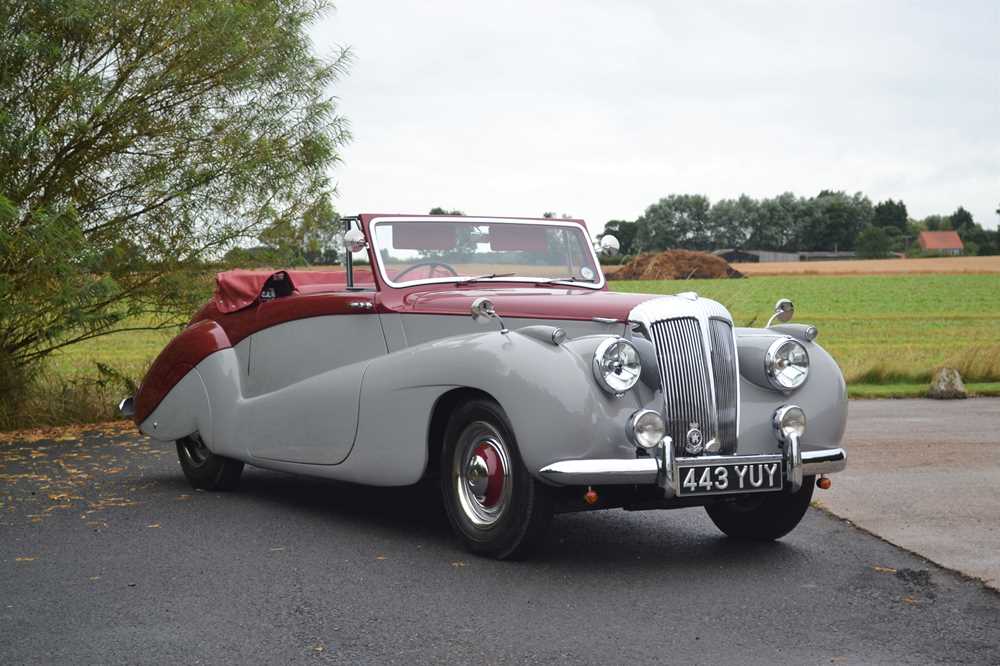 Development of the pre-war Daimler Fifteen culminated with the DB18 model announced for 1939. Independent suspension appeared for the first time on a Daimler and the DB18 featured an enlarged, 2,522cc version of the overhead-valve six first introduced in 1933. Daimler's customary fluid flywheel, pre-selector gearbox and worm drive rear axle comprised the transmission. A new drophead coupé appeared at the first post-war London Motor Show in 1948: the DB18 Special Sports. Stylish in a most un-Daimler-like manner, the Special Sports featured coachwork by Barker, the latter, like Daimler and fellow coachbuilders Hooper, being one of the BSA Group's many companies. The radiator grille was now curved, the alloy-panelled coachwork more streamlined, and the Special Sports benefited from hydro-mechanical braking and a power output raised to 85bhp courtesy of twin carburettors. In short: a model combining all the usual Daimler refinements with increased performance. When DB18 production ceased, only 500-or-so of these elegant and refined Special Sports roadsters had been completed.

This Special Sports was manufactured in 1951 and is fitted with the 2522cc overhead-valve straight-six engine mated to the pre-selector 3-speed gearbox and overdrive. ‘443 YUY’ is finished in the attractive colour scheme of Maroon over Grey paintwork with complementary Red leather interior upholstery. The Drophead Coupe has a recorded mileage of just 83,549 miles (at time of consignment) which is thought, but not warranted, to be genuine. In long-term previous ownership from 1974 to 2009, with the DB18 spending that entire period off the road.

Acquired by the previous custodian in 2009 as a project, ‘443 YUY’ was subsequently the subject of a painstakingly extensive restoration of virtually every component and is now without question one of the finest we have ever encountered. The exhaustive overhaul included the comprehensive engine overhaul; gearbox fettling by a pre-selector specialist; differential overhaul; suspension restoration (that was set up to original specification on the latest computerised equipment) and instruments recommissioning, while the entire interior trim and wiring loom were renewed and flashing indicators added, and a stainless steel exhaust installed. The bodywork, paintwork and ash frame repairs were carried out by PF Autos of Staffordshire.

The winner of ‘Best Car' in the 2018 Lancashire Automobile Club's Manchester to Blackpool run and ‘Best Barker-bodied Car' in the Northern Daimler Rally at Newby Hall in 2018 also, ‘443 YUY' comes complete with its original tool kit. Offered with a substantial history file that comprises original sale literature, spare parts catalogue and handbook; two CD-discs of restoration pictures; a full box-file of invoices relating to the restoration; other sundry paperwork and a current V5C. Certainly worthy of close inspection!