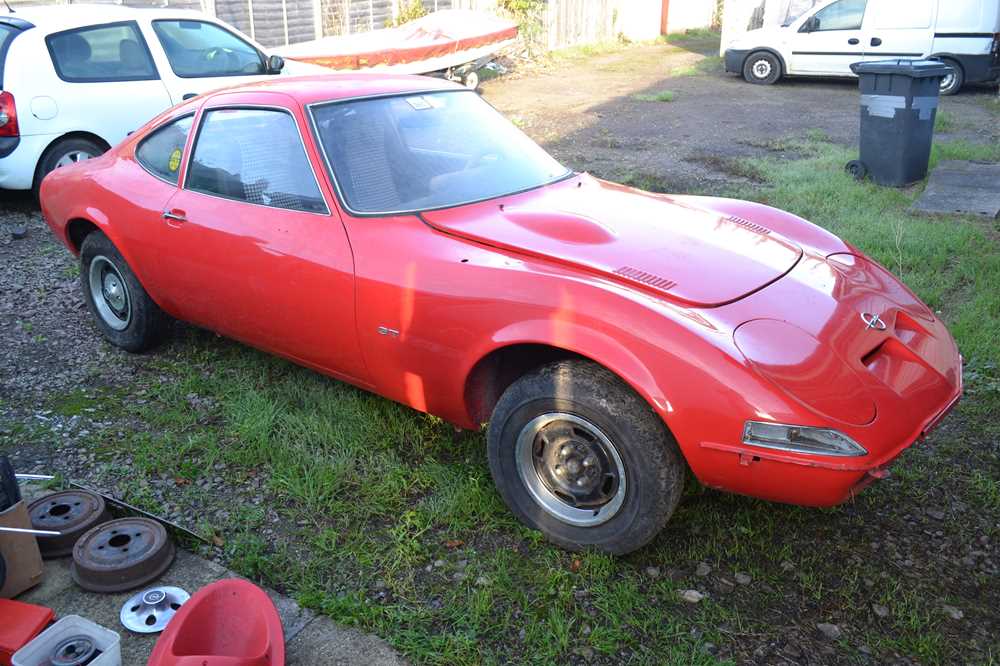 With a design team that included Clare MacKicahan and Chuck Jordan (of '57 Chevy Bel Air, Corvair Monza Spyder, Camaro and Opel Manta fame) work on the Opel GT project began in 1962. Carefully honed in the wind tunnel, it entered production some six years later. Based on a modified Kadett platform equipped with independent front suspension, a 'live' rear axle, disc / drum brakes and rack and pinion steering, its exotic fastback coupe body was specially fabricated in France. Powered by a choice of 1,100cc or 1,900cc four-cylinder powerplants mated to four-speed manual transmission, it was available in left-hand drive only. A great success in America which accounted for about 70% of production, GM nonetheless insisted that the larger-engined GT be restricted to 88bhp and 110lbft of torque lest its sales interfere with the Corvette.

Supplied new to France in 1970, this Opel GT was originally finished in Gold. Imported into the UK in 1979 with importation paperwork still present with the car, the Opel was first registered on UK roads in January 1980. Having a colour change to the current Red in October 1981, the Opel has had a total of three keepers in the United Kingdom and has been in current ownership since 1990 when it was purchased and very soon put into the garage for storage. Showing a highly credible 78,828km on the clock (equating to 49,000 miles), the GT is offered with an old-style V5, original owner’s manual and workshop guide, a collection of invoices from the 1980’s and four past MOTs from 1983-86. Fitted with the 1900cc four-cylinder engine, which has not been tried to turn-over, and the four-speed manual gearbox. Thought to be mostly complete, the Opel is a rare opportunity to obtain a GT for recommissioning.