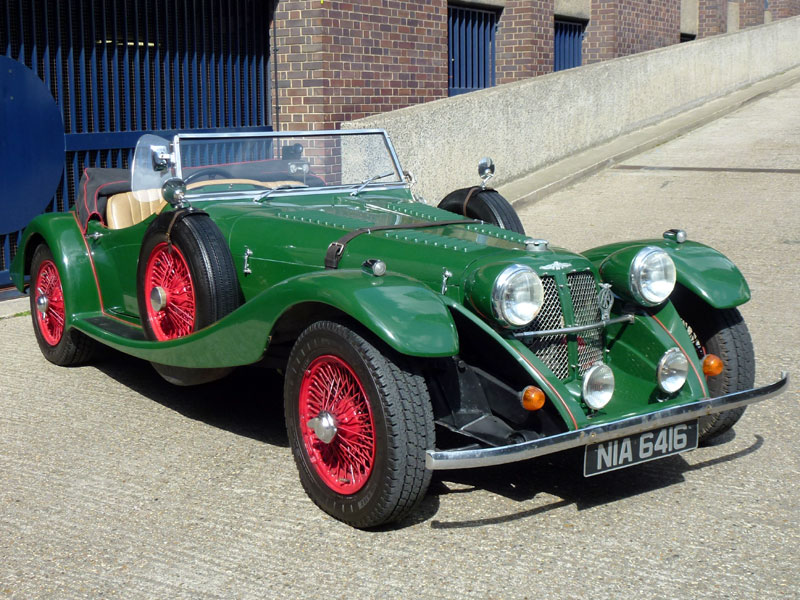 The Adams Roadster was designed by ex-Lister man Dennis Adams who was responsible for dramatic designs such as the Probe 16 used in the film A Clockwork Orange, and some of the classic Marcos designs. The Roadster was produced in very limited numbers, with only around 17 believed to have been constructed between 1986 and 1999. They were apparently available with Jaguar straight-six engines in several capacities, with the 4.2 being the most popular.

This Adams Roadster was acquired by the titled vendor in November 2015 with a view of exporting it to his home in Sri Lanka, but sadly a change in the importation laws soon afterwards meant that the car has remained at his City of London residence. The previous owner had purchased the car in August 2012 and undertook a lot of work on the car, notably replacing the original 2.8 twin-carburetted engine with a 4.2 triple-carburetted unit. A letter on file informs that the 4.2 engine was "refurbished" prior to installation with new gaskets, timing chain, alternator, and 4.2 clutch, plus the overdrive unit was "overhauled". A triple SU carburettor set-up completed the transformation. The previous and current owners have had the car maintained by leading Jaguar experts such as Twyford Moors and Classic Motor Cars (CMC), and the vendor describes the car as having "very good" paintwork and interior trim, and "excellent" bodywork, engine, transmission, and electric equipment. The car is supplied with a comprehensive history file featuring an original Adams Roadster brochure, a price list, and a magazine road-test, plus many maintenance invoices, previous MOT certificates, tax discs, and copies of previous registration documents.

PLEASE NOTE: This vehicle is now being offered at 'No Reserve'.
Share: