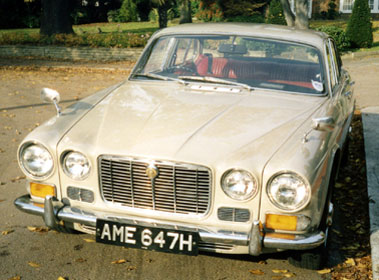 At launch in September 1968, the Jaguar XJ6 was the best car in the world, combining traditional Jaguar attributes of grace, space and pace with new levels of refinement, ride and handling at a price that made Rolls-Royce nervous. It replaced the ageing Mk2, the S-type, 420 and the leviathan MkIX/420G in one elegant package, styled by Jaguar founder Sir William Lyons himself. Offered with 4.2 and 2.8 litre versions of Jaguar's noble XK twin-cam straight six, even the smallest was able to push the svelte new saloon to 115mph. The Series 1 was superseded in 1973 by the Series 2, having a shallower grille, and by 1974 all cars were built on the 4in-longer wheelbase introduced as an option late in Series 1 production, though all 2.8s have the shorter wheelbase chassis. Series 1s are sought after for their more delicately-styled chrome and detailing. From a total production run of 98,000 Series 1s, fewer than 20,000 were 2.8s.

This car, a rare four-speed manual with even rarer overdrive, is understood to have benefited from an engine overhaul by Wrighton Engineering of Bromsgrove not to mention a radiator recore and sundry rechroming; the combined cost of which has been put at £6,000. Understandably, the vendor describes the XJ6 as being in "very good" condition with regard to its engine, transmission, electrical equipment, interior trim, bodywork and paintwork. While, the odometer shows an unwarranted 57,000 miles. The paperwork on file apparently includes around fifteen old MOT certificates and numerous invoices. An original short-wheelbase Series 1 XJ6 is a rare thing, and arguably represents William Lyons' last masterpiece in its purest form. As such, this pampered example is well worth a look.
Share: