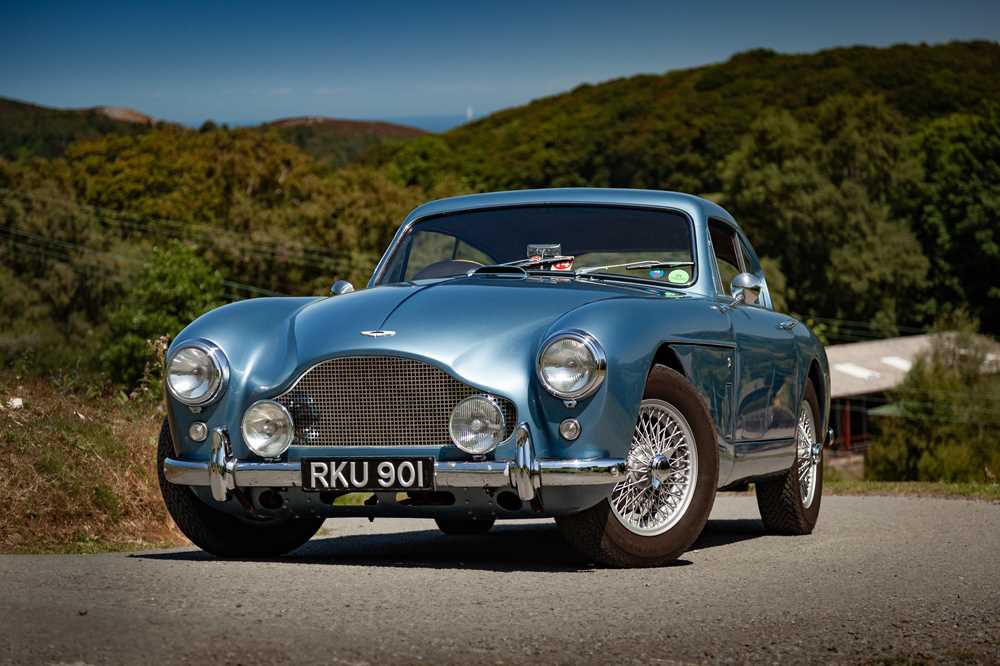 The elegant DB2 was a major step forward from the 2-Litre Sports model it replaced. The newcomer was based on a modified version of the square tube chassis originally designed by Claude Hill for the Atom prototype. It was clothed in a flowing all-alloy body penned by Frank Feeley and powered by the 2.6-liter straight-six Lagonda engine conceived by W.O. Bentley and Willie Watson. Yes, this was a car with pedigree, something that was emphatically confirmed a few months later with a first and second in class finish at Le Mans.

Production of the DB2 continued until 1953 when it was replaced by the DB2/4. A logical progression, the DB2/4 featured a pair of occasional rear seats and an eminently practical hatchback tail. Other notable changes included a wraparound windscreen, larger bumpers, and repositioned headlights. By the middle of the following year, the engine had grown in capacity to 2.9-liters, increasing the power output to 140bhp and the top speed to 120mph. It was in 1954 that David Brown acquired the Tickford Coachbuilding Works at Newport Pagnell, and it was there rather than Feltham the MKII versions of the DB2/4 were made from 1955. The revised model featured small tailfins, bubble-type tail lights, and added chrome. There was the option of a large-valve, high compression engine of 165bhp output and two different body styles - a 2+2 Hatchback and two-seat Drophead Coupe.

The final iteration of the DB2/4 was launched at the 1957 Geneva Salon. Somewhat confusingly christened the DB Mark III, it featured disc front brakes (from the first 100 cars onward) and Alfin drums on the rear, a hydraulic clutch, plus the options of overdrive for the standard manual gearbox and automatic transmission. The obvious visual differences were the adoption of a DB3S-style radiator grille and sensuously sculptured bonnet. The rear lamps were changed once more and the rear quarter lights made to open. Inside, an all-new instrument panel greeted the driver. The engine, which had been heavily reworked by Tadek Marek, featured a new crankshaft, stiffer crankcase, and induction modifications inspired by the racing unit of the DB3S. The power of the standard version was now up to 162bhp, while those equipped with the optional dual exhaust system were claimed to produce 178bhp - enough to sprint the Aston to 60mph in 9.3 seconds. There was now the choice of three body styles - 2+2 Hatchback, Drophead Coupe, and Fixed Head Coupe; though the latter only accounted for five of the 551 Mark IIIs built between 1957 and 1959.

Presented in Agean Metallic with contrasting Blue Grey leather interior, RKU 901 was recovered by its current owner as a restoration project from a garden in Sefton Park, Liverpool in November of 1990, where it had laid for some time without an engine due to the previous owner passing away. Following the acquisition, the car was extensively restored over a period of 10 years by reputable specialists Stamper Aston Martin and Chris Shenton Engineering, with the paint being completed by Williams Autos. RKU 901 was completed just in time for the Highland Millenium Jog, where the car finished with just a puncture. Over the subsequent 21 years, the current owner has competed in a number of rallies, notably the Centenary European Tour in 2013, where RKU 901 celebrated 100 years of Aston Martin by driving through the Swiss Alps and Italian Lakes with approximately 50 other Aston Martins.

RKU 901 is now mated with a 2922cc VB6H engine. The car also features power-assisted disc brakes and overdrive as per its original 1959 specification. Included with the vehicle is an impressive amount of documentation, including a photographic history of the car when collected, during restoration and once completed. As well as the original logbook and continuation book, we can also see a copy of the original order sheet, which shows that RKU 901 was delivered on 14 April 1959 to a Miss M. LA. Strickland of Whitwell, York. Originally manufactured in Elusive Blue with Blue Grey Connoly leather interior, the car was interestingly specified with unusual factory optional extras including thick pads on the pedals and a panoramic mirror. This is thought to be due to Miss Strickland’s small stature, specified so she could reach the pedals and see around her. Since then, it is thought the car was painted navy blue and then red before it was resprayed by its current owner.

Additional documentation included with the vehicle include a host of invoices dating as far back as 1970 and totaling nearly £80,000, MOTs dating back to 1973, various informative documents, and original parts catalog, workshop manual, and various other booklets, and for good measure, the original brake drums for Concours events and an original Lucas electric screen jet. The vendor rates the condition of the bodywork, engine, electrical equipment, paintwork, transmission and gearbox, and interior trim all as ‘Good’.

In true spirit, RKU 901 is due to be driven well over 200 miles to the auction at IWM Duxford.

The bill of sale specified previously mentioned is believed to be an order sheet/specification sheet.