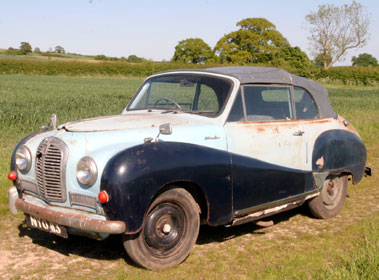 Soon after replacing the A40 Devon saloon with the Somerset, Austin replaced the Devon-based A40 Sports (built on a Devon chassis by Jensen) with a `proper' convertible A40 Somerset, built by Carbodies of Coventry. It boasted a sophisticated three-position drophead roof of the kind more commonly seen on Daimlers and the like. With just two doors and therefore considerably different bodywork, the Coupé was an attractive full four/five-seater that could be enjoyed in closed, Coupé de Ville or fully open form. Just 7243 were sold worldwide - most outside the UK - and very few survive.

This car's story illustrates why. Despite gentle use by just two owners, the second investing in a Gold Seal reconditioned engine in 1969, it failed its MoT due to rust holes through the floor when just 18 years old with 86,392 miles on the clock. Yet, whereas the vast majority went to the scrapyard at that point, leaving barely a dozen still on the road in the UK today, this one was preserved by a succession of owners with the intention of restoring it to its former glory.

The reconditioned engine, which has probably covered less than 10,000 miles, still starts and runs smoothly, the hood and leather seats are not torn and the car is complete, with two plastic crates full of spare parts, plus two very rare secondhand rear wings imported from USA, one brand new and one secondhand offside front wings and a pair of saloon rear wings. The chassis is generally sound and the car represents a very rare opportunity to start a `virgin' restoration of a very rare British post-war Drophead Coupé.
Share: