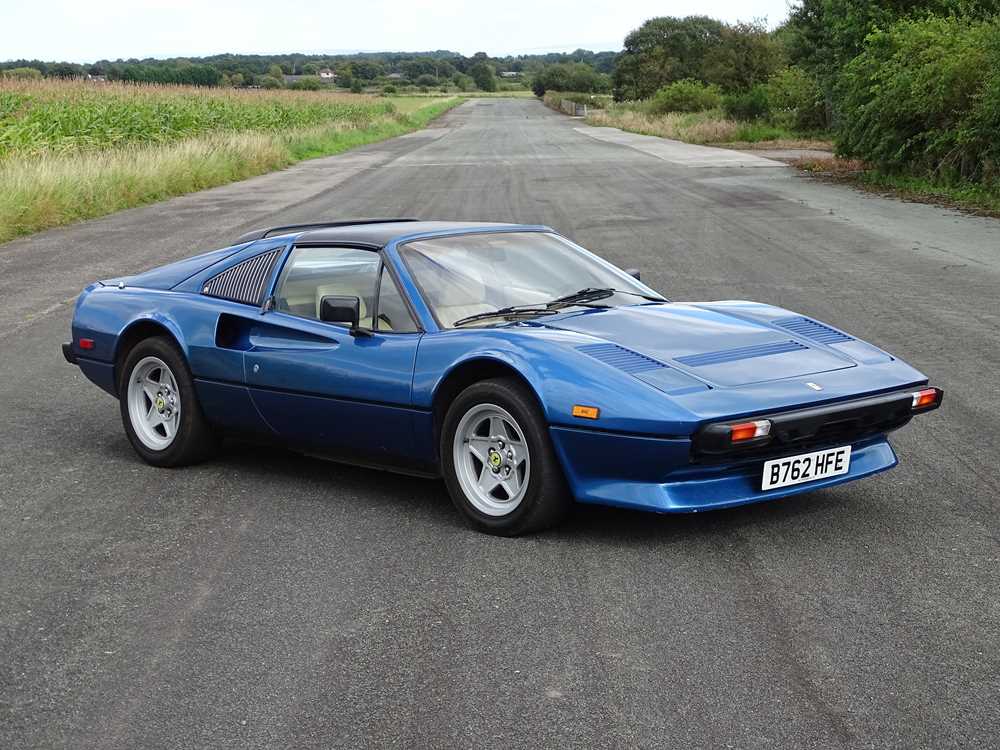 According to 308qvregister.com and indeed the VIN plate on its driver's side B-post, chassis 053041 was built in July 1984 as a 1985 model-year car. Originally finished in Chiaro Blue with Crema leather upholstery, it was supplied new to the American market. The Ferrari’s early history is unknown. However, paperwork on file suggests that it was bought by ‘The Godfather of Punk’ Iggy Pop shortly after he moved to Miami, Florida during 1998. An article written on the singer / songwriter’s car history which appeared in GQ magazine some twenty-two years later includes the following excerpt:

When Pop first moved to Miami, he bought an old electric blue 1984 Ferrari 308 GTS from a used car dealership. "They ran a classified ad, and when I got the papers, the last owner was John Malkovich.” He doesn’t know if it’s that John Malkovich, but as he says, “it's a very unusual name". He instantly fell in love. "It was a wonderful car. Whenever I wanted to blow off steam, I'd just race around the freeways here.” Later on, he traded up to a newer model, but he still hankers after the older version: “Whatever you did, it instantly did, whereas the newer ones they have the computer to help you." Iggy sold his Ferrari308 in 2002 after a 100mph run-in with the cops. “I drove the shit outta that car. Then I thought something terrible’s gonna happen, so I got rid of it.”

Passing through the hands of fellow Floridians Earl Sistrunk and Kostas Dino Linardakis thereafter, the latter took to ferrarichat.com on October 29th 2017 to confirm the 308’s provenance:

‘It was indeed owned by Iggy Pop (James Osterberg Jr). My mechanic in Ft Lauderdale (Tim Stanford Foreign Cars – the best Ferrari mechanic around) used to service the car when Iggy owned it, and then it was brought to Naples, where I purchased it from the third owner. It came back to the Ft Lauderdale area where I live, and when Tim saw the car he instantly recalled it and told me of its past’.

As an aside, Tim Stanford learnt his craft from Richard Cressman who was not only a founder member of Ferrari's North American Racing Team (NART) but also responsible for opening Florida's first Ferrari dealership, Cressman Foreign Cars Inc.

Fitted with a reconditioned steering rack at an indicated 44,217 miles during August 2003, the two-seater was treated to a new air-conditioning blower and cambelts the following year. The interior was refreshed by Peppy’s Auto Trim & Upholstery Inc of Naples, Florida at a cost of $4,770 in January 2010 and the cambelts reportedly changed again the next year at c.50,000 recorded miles. Mr Linardakis sold the Ferrari to Georgia-based lawyer Norman ‘Chip’ Gerry who had it maintained by Sports Car Service of Snellville. New oil hoses costing $1,052.84 were installed in November 2011, while work undertaken during 2012 encompassed: new water pump and cambelt tensioner bearings; a new hose between the fuel tanks, new Koni shock absorbers all round, fresh rear anti-roll bar bushings, replacement front ball joints (x4) plus a new Sanden 508 air-conditioning compressor (one of the associated bills totals $6,661.90 and quotes a recorded mileage of 55,638).

Benefiting from a new distributor oil seal and refurbished alternator in 2013, 2014 saw the 308 gain new stainless steel brake lines, fresh brake pads and overhauled brake callipers all round (the corroborating invoice totals $3,479.21 and lists the indicated mileage as 59,995). The last American bill on file is for two new Bridgestone tyres and a four-wheel alignment. Purchased from America by the vendor in 2016, the two-seater was UK road registered as ‘B762 HFE’ the following year. Interestingly, the V5C Registration Document gives the date of first registration as Jan 1st 1985 (January 1st is often chosen when an imported vehicle’s exact first date of registration is unclear). Regularly MOT tested during the current ownership but sparingly driven, the Ferrari’s odometer now shows some 61,800 miles.

Starting readily upon inspection and remaining untemperamental during our recent photography session, the Ferrari is now overdue a cambelt change and would doubtless respond to further fettling. There are imperfections to the paintwork but the car’s overall appearance is presentable. A decidedly inexpensive entry to Ferrari ownership with a fascinating back story, what’s not to like?