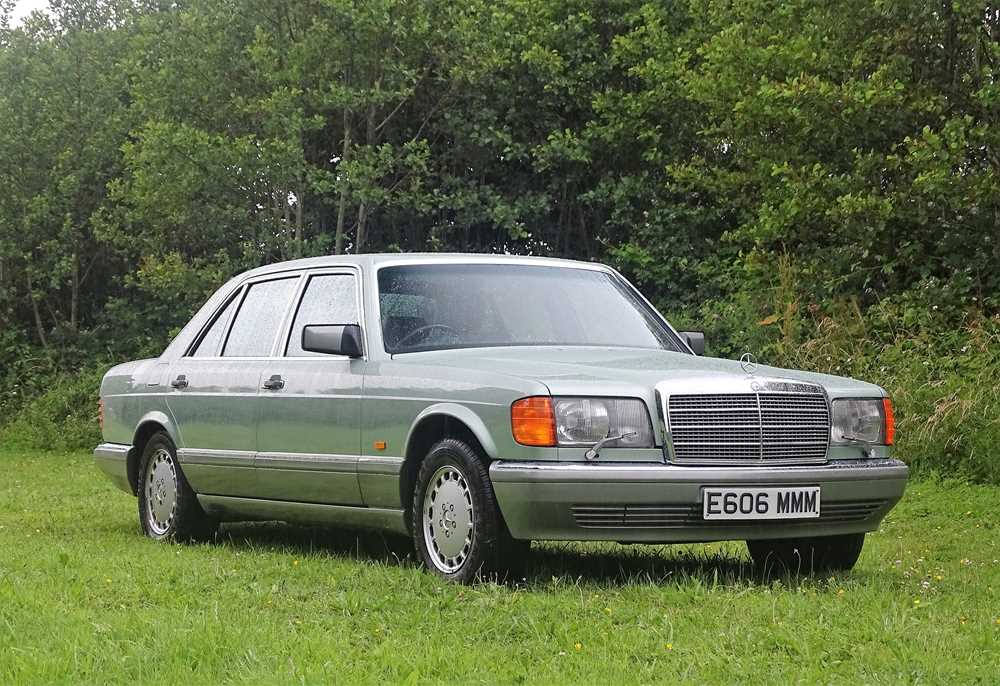 Entered from a deceased estate, ‘E606 MMM’ is finished in the rare and stylish combination of Willow Green metallic with Pine Green leather upholstery. According to mbdecoder.com, chassis WDB1260392A324158 was built on 5th March 1937 to order number 0753788734 complete with: ‘footrests in the rear (226), Becker Mexico Radio Cassette player (251), paintwork preservation (524), LSD oil (601), MPH speedometer (461) and output increase for 560SEL / SEC (822)’ etc. Part of a significant private collection for thirty years, the Mercedes-Benz comes with a letter from the late owner’s son to warrant the current odometer reading of 26,000 miles as representing the total covered from new. Starting readily upon inspection, this low owner, low mileage example of one of Mercedes-Benz’s most iconic flagship saloons is offered for sale with owner’s manual, first aid kit, V5C Registration Document and MOT Certificate valid until July 2021.

Introduced at the Frankfurt Motor Show in September 1979, the new W126 S-class was a quantifiable improvement over its W116 predecessor. Lauded by the contemporary motoring press as the 'best car in the world', it was not only lighter than its forebear but also offered an improved ride and sharper handling. Styled by Bruno Sacco, its sleek silhouette hid all round independent suspension, disc brakes, power assisted steering and a range of powerful all alloy V8 engines (later supplemented by more fuel efficient straight-sixes). Beloved by heads of state, captains of industry and celebrities alike, the W126 remains sought after to this day thanks to its impeccable build quality and timeless lines. Current between 1985 and 1992, the flagship 560 SEL model was powered by a 5547cc SOHC V8 engine that developed an unfussed 296bhp and 336lbft of torque; outputs sufficient to propel the long wheelbase saloon from 0-60mph in 6.9 seconds and onto 155mph. Despite a price tag of £75,000 (equivalent to over £185,000 in today's money), the luxurious 560 SEL accounted for an impressive 75,071 sales with most being to left-hand drive specification.