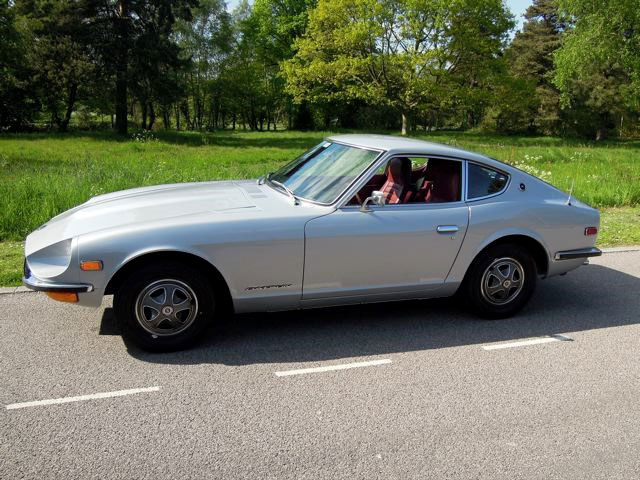 - One previous owner, purchased by the vendor from an estate dispersal sale

The iconic Datsun 240Z would not have made it into production without the enthusiastic support of Yutaka Katayama (then president of Nissan USA). A small team headed by Yoshihiko Matsuo created the car, and whilst hugely popular in America, sales were hampered on the other side of The Pond by a high purchase price and residual anti-Japanese sentiment. But any Z represents a huge leap forward over established classics such as the MGB and TR6, and in truth, the Datsun is the spiritual successor to the Austin-Healey 3000, which went out of production a year before the Datsun came onto the market in 1969. The design team even went so far as to think about how long-distance transportation to North America would affect the cars' cosmetic condition, and rust-proofed accordingly; by contrast imported British sportscars sometimes arrived on the dockside with visible corrosion. The Mercedes-Benz-inspired single overhead-cam 2393cc straight-six (L24) motor was a revelation in drivability, and would scream to its 6,500rpm redline. Hitachi copies of SU side-draught carburettors were utilised, but modified to improve fuel delivery and power giving 0-60mph in 8.3 seconds and a top speed of around 125mph.

Delivered new to the USA and resident in Washington State, this LHD matching numbers example has had just one previous owner and registers just c.38,000 miles on its odometer. Purchased by the vendor from an estate dispersal sale, it was treated to a bare metal respray approximately three years ago but otherwise remains extremely original. Finished in silver with red seats, red headlining and door trims, the car is fitted with extremely rare hubcaps on steel wheels. Accompanied by a Swansea V5 document it is described as "running beautifully" and will be offered with a fresh MoT.
Share: