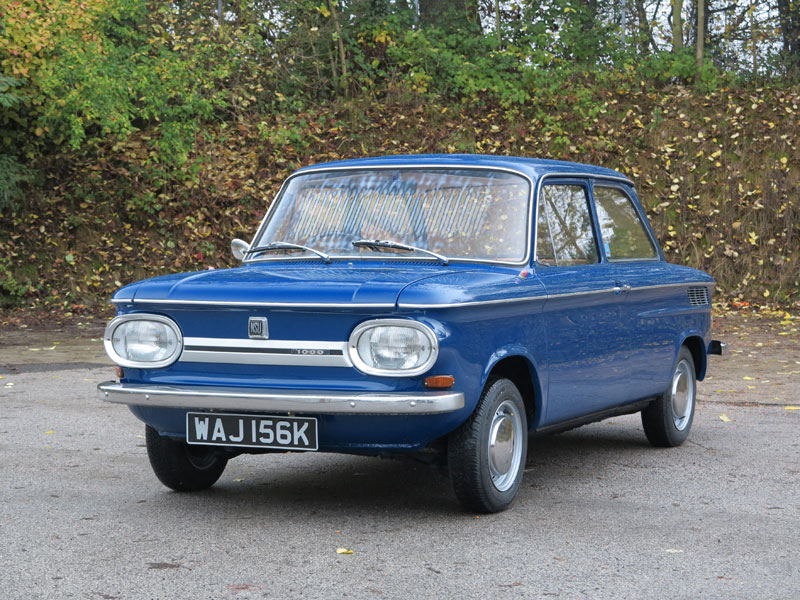 - 2 owners from new (the first being an NSU dealer)

NSU's Prinz 1000 model range (the Prinz tag was dropped in 1967) was launched at the 1963 Frankfurt Motorshow. Evolved from the Prinz 4, the similarly-styled newcomer was larger and had a four-cylinder rear-mounted OHC powerplant rather than the Prinz 4's two-pot OHV one. The 40bhp of the 996cc version fitted to the 1000 and more luxuriously-equipped 1000 C was sufficient to endow the little NSU with performance on a par with the Mini-Coopers and Hillman Imp Sports of the day.

The very pretty right-hand drive 1000 C now offered has had just two keepers from new. The first was the proprietor of an East Yorkshire NSU dealer, who was sufficiently smitten with the NSU to retain it for himself when the agency closed down. Then in 1992 it was acquired by a marque enthusiast who retained it until he passed away earlier this year. 'WAJ 156K' was recently treated to a (glass removed) cosmetic renovation and is now offered in its original attractive livery of River Blue bodywork teamed with Tobacco-coloured interior trim. One of just 16 such NSUs known to the DVLA, it represents a rare opportunity to acquire an unmolested example of a much admired model.
Share: