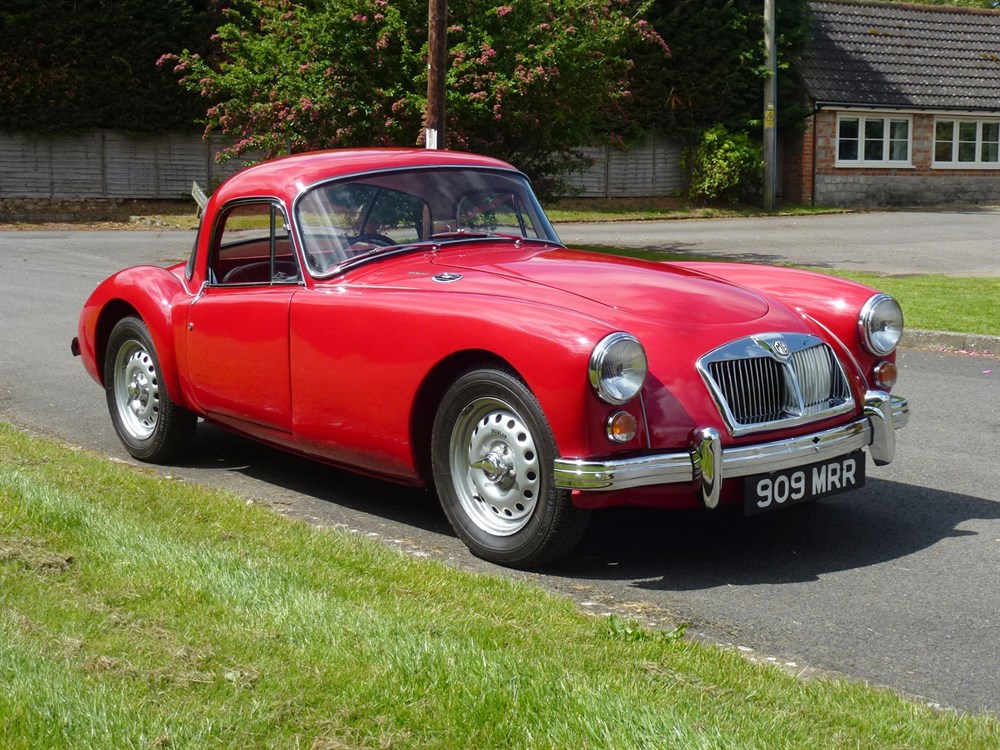 Good MG As have been keenly sought for many years, so bidders should take special note of this one, as it's clearly not only in very fine order but one of the rarest of the breed - ie a 1600 MKII De Luxe Coupe of which only 23 were built and just 13 of those were created with right-hand drive for the home market. The De Luxes differ from the standard fare in having Dunlop disc brakes all round and Dunlop wheels, as well as other such Twin Cam-esque niceties as separate brake and clutch master cylinders - in essence they are MG A Twin Cams powered by pushrod engines and rarely come to market. '909 MRR' departed the Abingdon production line in February 1962 and was first registered in Nottinghamshire in or after March that year, and remains in its original livery of Charlot Red bodywork and Red leather interior trim. Restored in 2016-2017, it is these days considered by the vendor to have 'excellent' bodywork, paintwork, upholstery, engine and transmission and comes complete with Heritage Certificate. A rare and exciting opportunity for classic MG aficionados everywhere.

To quote the company's own advertising, the MG A was the 'first of a new line'. Launched at the Frankfurt Motorshow of 1955, it owed its modern streamlined design to the body Syd Enever had created for George Philips' 1951 TD Le Mans car, and featured a chassis penned by Roy Brocklehurst and power from a 1489cc version of the straight-four BMC B Series engine, as found in the MG Magnette. In 1959 the capacity was increased to 1588cc and to 1622cc for the MKII 1600 version of 1961, which also boasted bigger valves and re-engineered combustion chambers. A total of 101,081 MG As were sold between 1955 and 1962, most of which were exported.