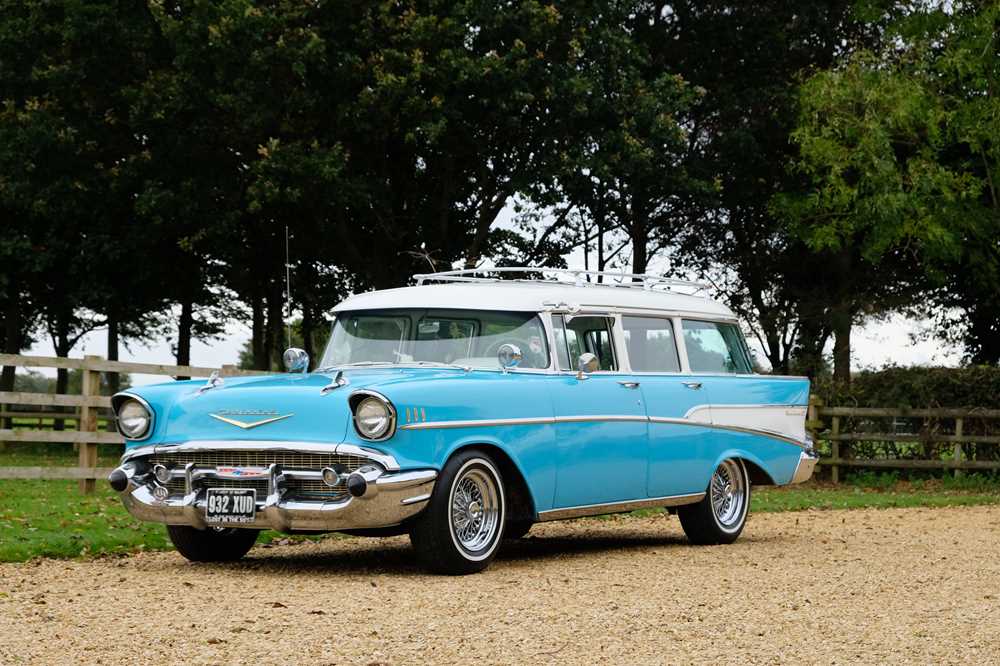 In 1955 Chevrolet began production of the second generation of the Bel Air. Chevrolets produced from 1955 to 1957 are commonly referred to as “Tri-Five” Chevrolets. Interestingly enough, each year of the “Tri-Five” Chevrolets can be differentiated by their unique front end. For the 1957 model year, Chevrolet once again chose to restyle their car, this time it was in an effort to compete with the all-new 1957 Ford. The redesigned Chevrolets featured design cues borrowed from Cadillac. The car was very well received, and today the 1957 Chevrolet Bel Air has gained the reputation as one of the most iconic cars of the ‘50s.

Presented in Larkspur Blue with ivory accents and chrome brightwork with matching interior, 932 XUD presents perhaps the only Bel-Air Townsman to ever be offered for auction in the UK. Acquired by its current custodian some 9 years ago to form part of a private collection, this particular example features chrome-wire wheels, chrome roof rack, cooler box in the boot and was subject to interior re-trimming by Ecklers of Hampshire.

Mated to a 5.5L Chevrolet V8, a TH350 three speed transmission now replaces the two-speed Powerglide that would have been fitted as standard, and other upgrades include a full front disc kit with a dual servo brake conversion, a power steering conversion and gas shocks have also been added to front and back.

932 XUD was subject to full service, replacement plug lead ends, rear brake overhaul and engine tuning in December 2020 and comes accompanied with the V5 document, a number of previous MOTs and invoices, as well as the 1957 owner’s guide, accessories booklet, wiring diagram manual...and yes, the fan and guitar on the dashboard are also included.