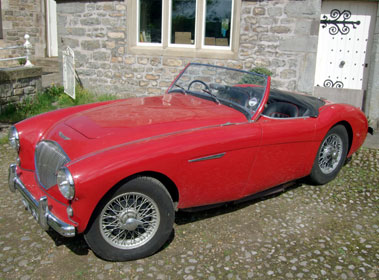 Arguably the purest incarnation of the Big Healey, the '100' (BN1) entered production in 1953. Blessed with a body that would not have looked out of place on a period Ferrari or Maserati barchetta, the notably rigid Donald Healey designed box-section chassis (complete with underslung rear axle) that underpinned it was equipped with independent coil-sprung front suspension, a 'live' rear axle and all-round Girling hydraulic drum brakes. Offering a level of performance that few rivals could match, it was powered by a wonderfully torquey 2660cc four-cylinder engine mated to three-speed plus overdrive gearbox (giving five forward speeds in total). Justifiably praised by the contemporary press for its poise and handling, the '100' remains one of the all time great British sportscars.

Finished in red with red-piped black leather upholstery, this particular example is described by the vendor as being in "good" condition with regard to its engine, three-speed manual plus overdrive gearbox, electrical equipment, interior trim, bodywork and paintwork. An original right-hand drive car, the '100' is understood to have spent most of its life in South Africa before being repatriated and issued with the UK registration number 'ROL 600' on 17th January 1991. Reportedly in single ownership from then until earlier this year, the two-seater is said to have formed part of "a small private collection of very well maintained vehicles". While, recent work has apparently seen it benefit from a stainless steel exhaust and new rear tyres. Judged by the vendor to be "ready for immediate use and an enjoyable summer's motoring", this appealing Big Healey is offered for sale with MOT certificate valid until April 2010 and historic class (free) road tax.