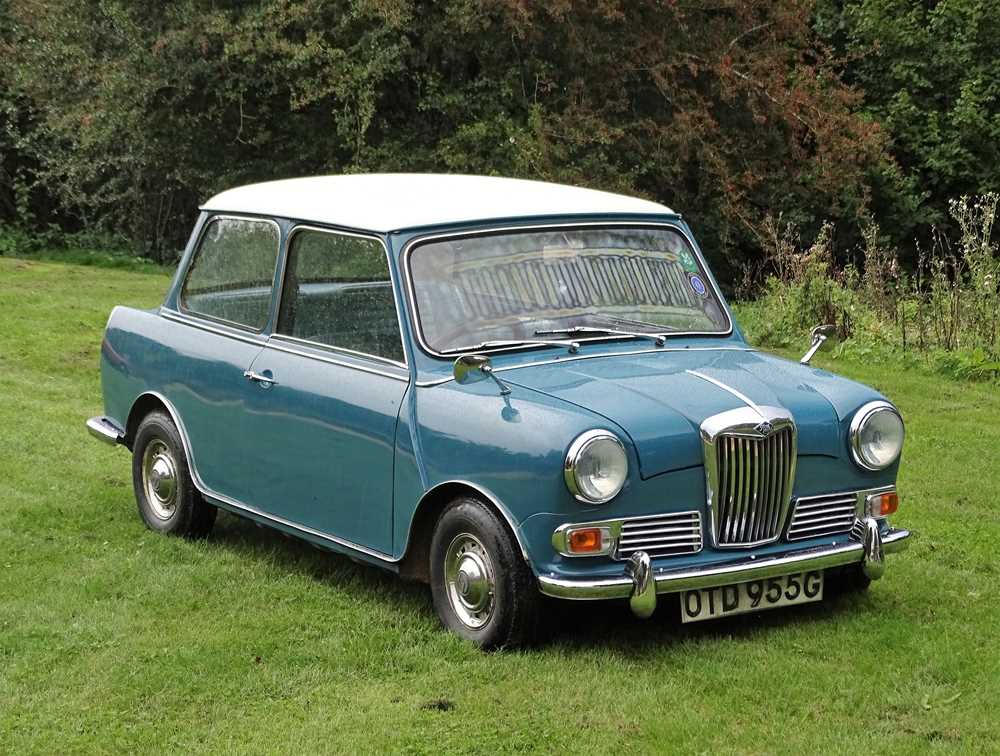 First registered in Lancashire on January 1st 1969 (or so its ‘OTD 955G’ number plate would imply), this rare surviving Elf MKIII was still resident in the same county some thirty-eight years later. Relocated to Somerset by its previous keeper, the Riley appears to have never needed (or undergone) a full restoration. The presence of the original Light Blue leather upholstery lends credence to the idea that the present odometer reading of 68,900 miles represents the total covered from new. However, there is insufficient paperwork on file to warrant it. The engine number listed on the V5C Registration Document matches the one visible under the bonnet and the rocker box still carries a Riley sticker. Part of a large private collection for the past six years, this delightful Mini derivative has period charm aplenty.

Nobody living in the UK in 1959, will ever forget the birth of the Mini - the phenomenon that changed small cars for ever. Following on just two years later, the Riley Elf and Wolseley Hornet were luxurious versions of that car. They sported longer, slightly finned rear wings and larger boots that gave the cars a more traditional three-box appearance, plus 2.5 cu ft of extra stowage space. The front-end treatment incorporated each marque's traditional upright grille design, giving the cars a less utilitarian appearance than their deliberately basic sibling. They sported larger-diameter chrome hubcaps than the Austin and Morris Minis, plus additional chrome accents, bumper overriders, part leather seats and wood-veneer dashboards - the full width version on the Riley being one of the main differentiators between it and the Wolseley. The Riley was the more expensive of the two - the dearest factory-built Mini of all. The Elf name was intended to recall the Sprite and Imp monikers used by Riley in the 1930s. There were three versions of the Elf during the model's nine year reign. The MKI was powered by the 848cc version of BMC's ubiquitous A-Series engine, while a single carburettor version of the Mini Cooper's 998cc power unit was employed in the Mark II variant of 1963. In tune with upgrades on the standard Mini, Hydrolastic suspension was fitted from September 1964. However, it was the MKIII Elf of 1966 that embodied the longest list of upgrades the model was to enjoy, including: wind-up windows, fresh-air fascia vents and the remote control gear linkage from the Mini Cooper; also, concealed door hinges two years before they were seen on the mainstream Mini. Some 30,912 Riley Elfs were produced all told.