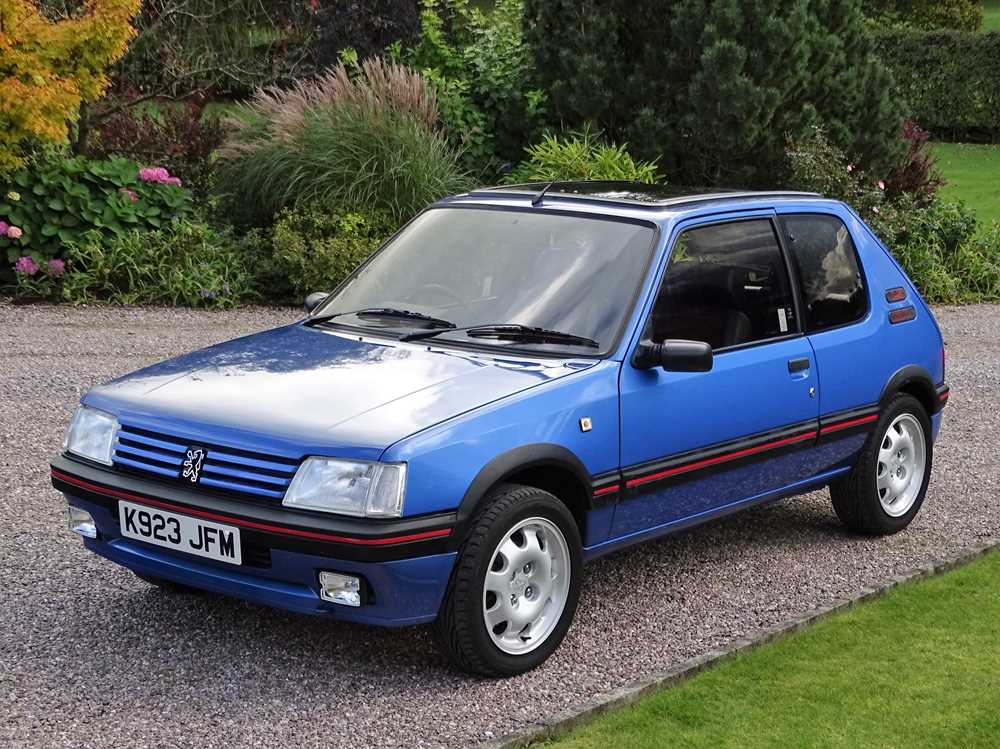 Surely the most famous UK-supplied Peugeot 205 GTi, ‘K923 JFM’ has been driven by The Stig on ‘Top Gear’, championed by Jezza himself on ‘Clarkson’s Car Years’ and even immortalised by Corgi as a 1:43 scale die cast model! It has also graced the pages of Auto Express, EVO and Performance French Cars magazines.

Supplied new to Mrs V. Higgins by Brazier Bros of Ellesmere Port on August 1st 1992 as one of the more powerful non-catalyst equipped models, the Peugeot pleasingly retains its original book pack complete with stamped / annotated maintenance booklet and Clarion radio code card not to mention old MOT certificates dating back to 1995 and bills / invoices from 1996 onwards.

Evidently much loved by its various keepers and doubtless pampered because of its numerous 'celebrity' appearances, the 205 GTi was treated to a new clutch at 62,086 miles, a top-end engine overhaul at 79,149 miles and underwent its most recent cambelt change plus a rolling road tune at 91,737 miles (c.1,100 miles ago). The latter was carried out by Skip Brown Cars & Components Ltd of Tarporley (a firm which will need little introduction to marque enthusiasts especially if they have a motorsport bent).

Entered from a private collection, ‘K923 JFM’ was last serviced at 92,664 miles (c.200 miles ago) in February 2020. As well as an oil change, it benefited from a replacement front lower engine mount, fresh Bilstein front shock absorbers and droplinks plus a new gear linkage rod set (the associated bill totalling £1,175.82)

Starting readily upon inspection, the Peugeot presents well but not flawlessly with a few stone chips and some internal fabric wear. The alloy wheels have been refurbished and the engine bay cleaned. Topping numerous polls as to the best hot hatch ever made, the Peugeot 205 GTi is a true motoring icon. As such the opportunity to acquire what is probably the most famous UK-supplied example and the Corgi car to boot – ‘K923 JFM’ – is not to be missed.