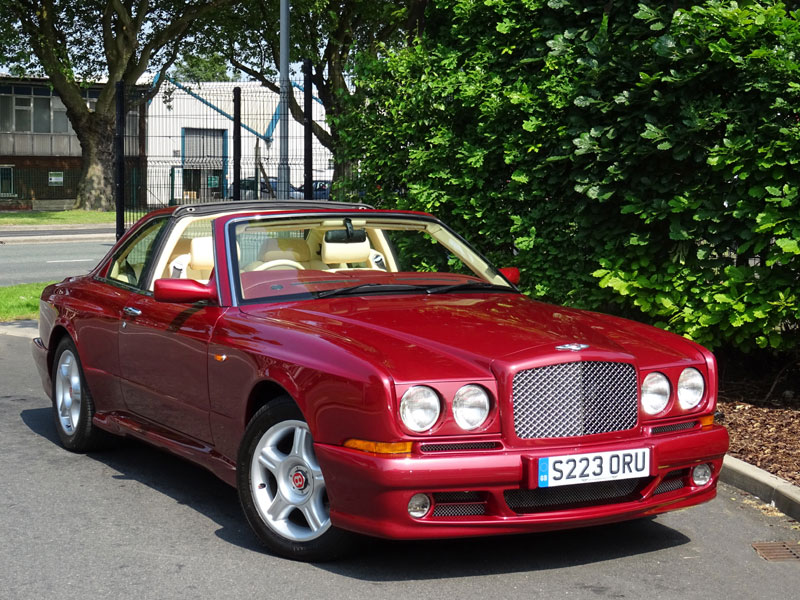 - First owned by David Allenby of Romsey and just 28,800 miles from new

Unveiled at the September 1998 Paris Salon, the Bentley Continental SC became the marque's flagship model. Sharing the same short wheelbase platform as its high-performance Continental T sibling, the newcomer featured an intricately glazed roof with detachable panels above the front seat occupants that could be stowed neatly in the boot. Entrusted with making the necessary sheetmetal changes, Pininfarina also added chassis bracing along the lines of the soft-topped Azure model. Powered by a tuned version of Bentley's iconic 6.75 litre turbocharged V8 engine allied to four-speed automatic transmission, the SC or Sedanca Coupe - so-called because its elegant lines recalled one of the 1930s most charismatic bodystyles - had a quoted 406bhp and 835Nm on tap. Reputedly capable of 0-60mph in 6.1 seconds and 155mph, the 2+2-seater was trimmed with the very finest leather hides, wool carpets and wood veneers available. A paragon of luxury, as one might expect given its £255,000 price tag, just 73 examples were sold worldwide of which a mere 25 are understood to have been completed to right-hand drive specification.

Finished in Fireglow Red with Barley-hued leather upholstery and Red carpets, this particular example was sold new via Bentley New Forrest to the Hampshire businessman David Allenby who took the trouble to visit the Crewe factory before work began so as to ensure his requirements would be met. The accompanying factory build record details the car's initial construction, transfer to Pininfarina, return to the UK for completion and final quality control sign off prior to dispatch. As well as supplying the Continental Sedanca Coupe, Bentley New Forrest carried out ten services over its first 23,000 miles. Still showing less than 29,000 miles to its odometer, the 2+2-seater's subsequent maintenance is chronicled within a comprehensive album that also includes copies of old MOTs, registration documents and tax discs not to mention memorabilia relating to the Continental SC's model launch and various period road tests / articles.

Successfully shown at several Rolls-Royce Enthusiasts' Club rallies by its previous (third) custodian John McGlynn, chassis SCBZZ23E1XCH65040 became part of renowned Norfolk businessman Graham Dacre CBE's extensive motorcar collection during March 2011. Significant as the first Bentley to be launched under Volkswagen's stewardship but with its roots very firmly in the previous Crewe era, the Continental Sedanca Coupe is already among the most highly prized Continental R derivatives. 1 of a mere 25 right-hand drive cars made and having covered less than 29,000 miles from new, 'S223 ORU' is worthy of close inspection. Offered for sale with V5C Registration Document, copy Factory Build Record, service history and MOT certificate valid until June 2017.
Share: