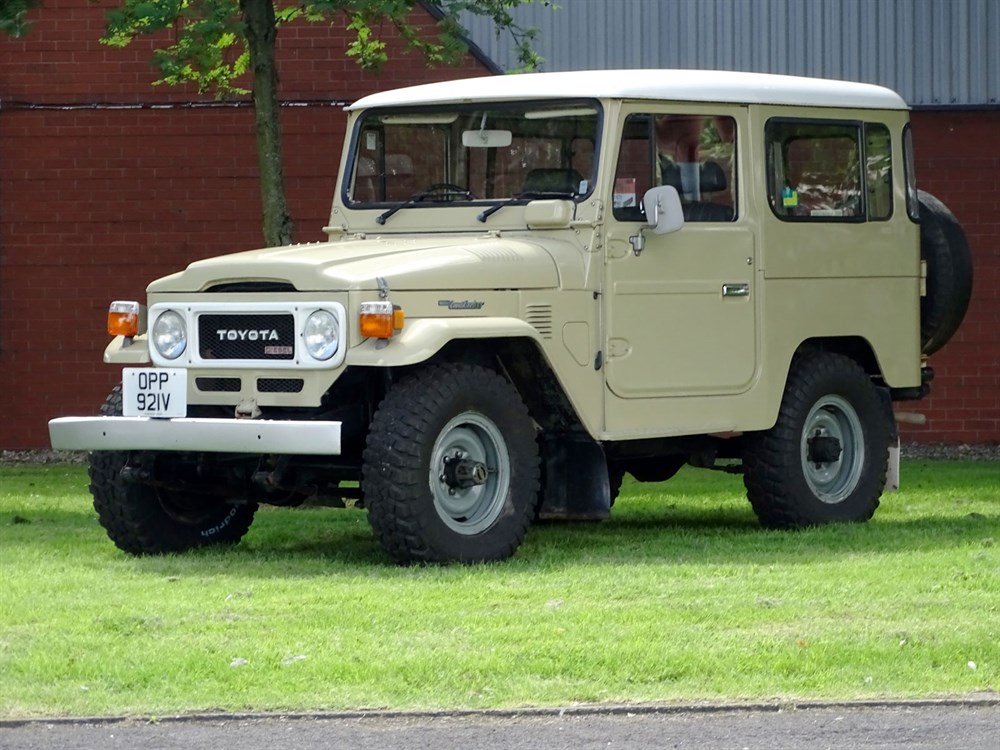 - Said to be "rust free and unrestored and never welded"

"An iconic name in the history of off-road vehicles, Toyota's Landcruiser evolved from a vehicle designed to fulfill an order by the US military during the Korean War in 1951. The first civilian version, the 20 series, gave way to the classic 40 in 1960, with numerous improvements designed to give the Landcruiser broader appeal and more versatility. Sold with unburstable four-cylinder diesel or six-cylinder petrol engines, the Landcruiser proved hugely popular in the United States and many other export markets, including Australia where the model was first seen being used in the Snowy Mountains Scheme. Variants included the short-wheelbase J40, mid-size J43 and long-wheelbase J45 and by the 1970s the Landcruiser was considered a serious contender to the likes of Land Rover in the off-road stakes. Although diesel-powered Landcruisers were already in production in Brazil using local Mercedes-Benz engines, the first Japanese model exported was the HJ45 of the early 1970s, using an in-line six-cylinder unit. In 1974 this was supplemented with a 3-litre four-cylinder on the BJ40/43 models. In 1981 Toyota revamped the diesel model, adding front disc brakes and a more powerful 3.4-litre six-cylinder 3B engine, extending the range to include a longer wheelbase BJ45 in addition to the two-door short chassis BJ42. In 1984 the venerable 40 series Landcruiser was finally pensioned off, replaced with the all-new J70 model. There is burgeoning interest in early 4WDs today, with Toyota's seminal 40 series Landcruiser at the forefront of this movement - helped no doubt by the release of the retro-styled FJ Cruiser in recent years. There are now specialists all over the world performing big dollar restorations on early Landcruisers to show standards and examples are beginning to appear - and fetch serious money - at major auction venues. In short, the BJ-series Landcruiser has become highly collectible.

The ultimate development of the original short-wheelbase Landcruiser, this BJ42 diesel model dates from 1980 and, going by the VIN, is thought to be the 130th example to leave the factory. The previous owner purchased the Toyota from his elderly neighbour, the original owner, in December 2007 after he handed in his driver's licence at the age of 87 years. Having known the owner and vehicle since the late 1980s, the vendor was familiar with just how fastidiously it had been maintained - the former owner purchased the vehicle upon his retirement and primarily used it for fishing trips, rarely taking the Landcruiser off road. Always regularly serviced, the Toyota remains remarkably well preserved, right down to spare tyre, one of the factory originals. Reluctantly offered for sale due to a lack of garage space, the Toyota comes with a factory grease gun and service light (which connects to a plug inside the gearbox) both supplied with the vehicle when new."
Share: