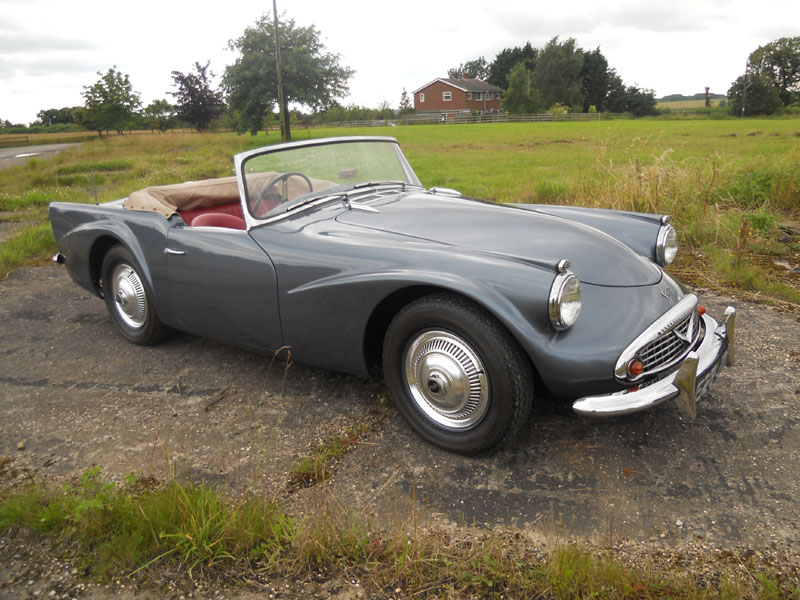 Daimler launched their new sports car at the New York Motorshow of 1959. They wanted to crack the American market and the styling had transatlantic overtones to suit. The car was originally called the Dart, but Daimler quickly succumbed to the threat of legal action from Chrysler's Dodge division and rechristened it the SP250. The newcomer was clothed in a tough fibreglass body and built around a traditional cruciform-braced ladder-frame chassis, the initial version of which (as found on A specification cars), was sadly lacking in torsional rigidity. By 1960, the Daimler Motor Company was in Jaguar's hands and the so-called B specification SP250s featured a much stiffer frame, equipped with additional outriggers and a strengthening hoop between the B posts. The jewel in the car's crown was its engine, a silky smooth 2.5-litre V-8 unit designed by Edward Turner. With 140bhp on tap and a low all-up weight, the Daimler's performance was strong and the sound was one to savour. Suspension was independent with wishbones and coil springs at the front and a live axle hung on leaf springs at the rear. Braking was by hydraulically-operated discs all-round.

The righthand drive B specification SP250 on offer is finished in Mountain Blue complemented by a Burgundy-coloured interior. According to the accompanying Heritage Certificate, it was first registered to the Birmingham dealer Reeve & Stedeford in June 1961 as a demonstrator and came equipped with disc type wheels, heater and a radio. Since then it has had just one private keeper. The vendor regards the Daimler as being in "exceptional" condition for so original an example, and informs us that the recorded mileage of 26,676 is correct. He is selling '628 JOJ' complete with the original owner's handbook, old tax discs from the 1960s and MOTs from the 1980s, plus one valid into July next year. A very rare opportunity.
Share this page: