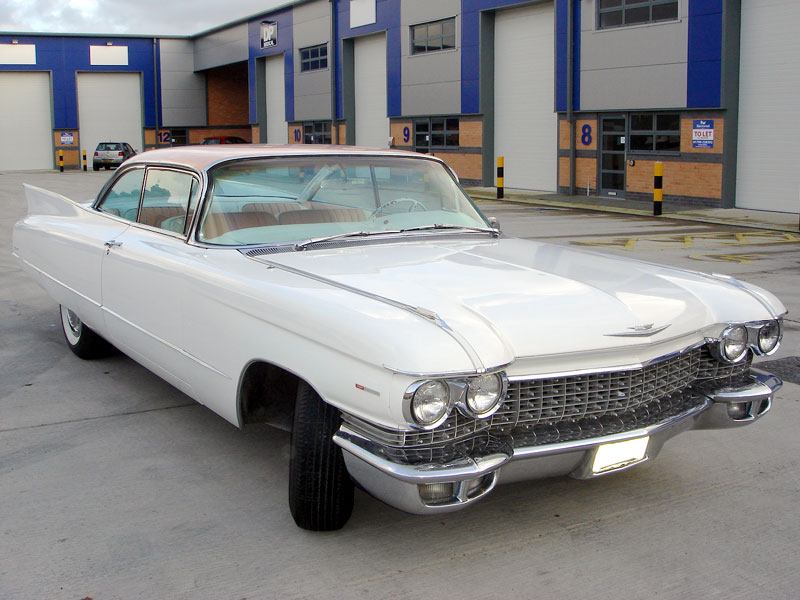 Following the retirement of legendary GM designer Harley Earl, his successor, William Mitchell, was charged with giving the 1960 model-year Cadillac range a more formal yet youthful look. To this end, he chose to reduce the height of the tail fins, remove the divider from the 'bullet' encrusted egg-crate grille, simplify the front bumper and have Ed Taylor revamp the rear light layout. The result was a series of cars that remained faithful to Earl's 'jet plane' imaginings but also embraced the future. Known as the Series 6300, the Coupe De Ville and its Sedan De Ville sibling were based around tubular X-frame chassis equipped with all-round coil-sprung suspension, power assisted steering and self-adjusting brakes. Powered by a 390ci (6.4-litre) OHV V8 engine allied to Hydra-Matic transmission, the De Ville cars were surprisingly quick (contemporary road tests recorded 0-60mph in 10.3 seconds and top speeds of 110mph). Though, with a quoted 325bhp and 430lbft of torque on tap, they had need of their power brakes. Priced at $5252, the 1960 Cadillac Coupe De Ville notched up some 21,585 sales.

Finished in White with a Salmon Pink roof and Pink/White upholstery, this left-hand drive 1961 Coupe De Ville is considered by the vendor to have a "good" engine, automatic gearbox, interior trim and bodywork and "okay" paintwork. Originally the property of rock 'n' roll legend Elvis Presley (or so an accompanying State of California Title Document implies), 'VFO 302' is subsequently understood to have been gifted to his best man, Marty Lacker, as a present for Christmas 1965. In the current ownership since being purchased from our September 2006 sale, and believed but not warranted to have covered just 76,099 miles from new, it is now offered for sale with sundry paperwork. A stunning survivor of Cadillac's (and Elvis's) golden era and not to be missed!
Share: