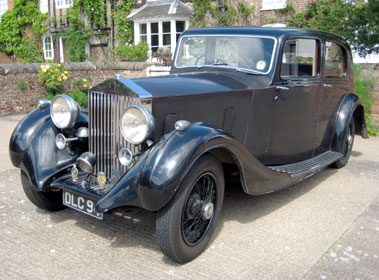 The penultimate development of Rolls-Royce's original 'owner-driver' orientated line that had begun with the 20hp some fourteen years earlier, the 25/30hp was introduced in 1936. Still utilising a cross-braced ladder-frame chassis equipped with semi-elliptic leaf-sprung suspension and servo-assisted four-wheel drum brakes, the passage of time had added such refinements as adjustable hydraulic shock absorbers (complete with steering wheel mounted controls) and a centralised lubrication system. Powered by a 4257cc OHV straight-six engine mated to four-speed manual transmission, the 25/30hp was intended to traverse a new generation of better surfaced, faster roads. Sufficiently powerful to accommodate the whims of almost any coachbuilder, most were capable of a reputed 80mph. Superseded by the Wraith in 1938 after just 1,201 had been made, the 25/30hp remains one of the rarest pre-WW2 Rolls-Royce variants.

Bodied as a Sports Saloon by H.J. Mulliner, this particular example - chassis number GXM 1 - has been in the same titled family ownership from new. Only ever driven by three people (each from a separate generation), the past seventy-three years have seen it cover a mere 47,500 miles. Although perhaps more impressive is the degree of originality that the Rolls-Royce has maintained over the last eight decades. Still wearing the same dark chocolate over black paintwork and brown leather upholstery with which it left the coachbuilder, the 25/30hp is nevertheless 'on the button' possessing a MOT certificate valid until May 2010 and current historic class (free) road fund licence. Never allowed to deteriorate to the point of needing restoration, the Sports Saloon is by no means pristine. However, we would not disagree with the vendor's assessment that chassis GXM 1 is in "good overall" condition with regard to its engine, four-speed manual gearbox, electrical equipment, interior trim, coachwork and paintwork.

Convinced on safety grounds to have the Rolls-Royce's wire wheels re-enamelled and fitted with fresh tyres some years ago, the present custodian has not only resisted all other attempts at refurbishment but also kept a note of every journey undertaken since 1990 or thereabouts when the odometer showed 45,361 miles. Indeed, he estimates that the total mileage covered during his stewardship has only been 4,000 and as such would rather the 25/30hp went to a more active home. With its raked windscreen, flowing wings, sloping back and sparse brightwork, chassis GXM 1 exudes an understated elegance. While, the lack of front / rear bumpers is compensated for by the presence of both soft and loud horns. Externally the finish has dulled somewhat and carries various imperfections, as one might expect after seventy-three years usage, but inside the wood veneers still exude a soft sheen and the seat cushions have remained surprisingly resilient.

As cellulose paint becomes increasingly scarce and the chemicals used to treat leather ever gentler so the patina exhibited by this 'timewarp' Rolls-Royce seems all the more special; a fact recognized by the rise in popularity of preservation classes at Concours d'Elegance meetings around the world. Extraordinary, exceptional and quite possibly unique, this magnificent 25/30hp is offered for sale with an original (albeit annotated) handbook, well stocked but not complete tool tray, continuation buff logbook, service instructions, assorted handwritten notes and V5 / V5C registration documents plus the aforementioned MOT certificate and road fund licence.
Share: