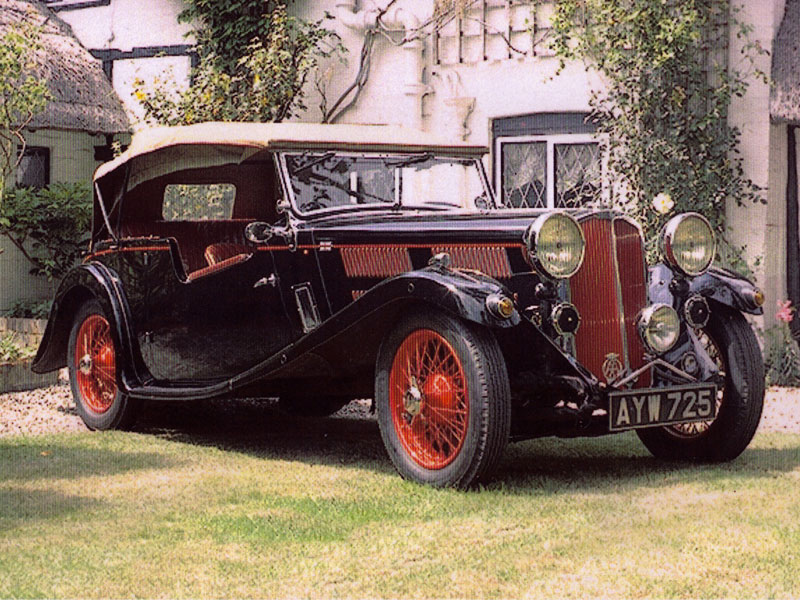 Introduced in 1933, the Gloria model series helped cement Triumph's reputation as a manufacturer of distinctly sporting motor cars. Based on a sturdy cross-braced chassis equipped with an underslung rear axle, all-round semi-elliptic leaf-sprung suspension and four-wheel hydraulic drum brakes, the newcomers were powered by Coventry Climax designed - but Triumph modified and built - IOE (inlet over exhaust valve) four- and six-cylinder engines. Four-speed gearboxes were fitted as standard and incorporated an ingenious freewheeling mechanism that permitted clutchless gear changing. Able to call upon the styling talents of Frank Warner and Walter Belgrove, the Coventry firm constructed much of its own coachwork (though, Cross & Ellis, Avon and Salmons bodied various drophead coupes). Recruited some two years after his famous Monte Carlo Rally victory aboard an Invicta S-type, Donald Healey wasted little time in furthering Triumph's competition pedigree. Thus, Gloria variants claimed class victory on both the 1934 and 1935 Monte Carlo Rallies.

Decidedly rakish yet surprisingly practical, the Gloria Speed Model Tourer made good use of Triumph's patented system whereby the shape of its doors could be altered from a 'straight edge' to a 'cut away' profile depending upon the occupants' wishes. Surprisingly, no other manufacturer worldwide adopted this feature which for the period must have been quite a 'party piece' (though, perhaps they were deterred by the associated royalty fees). Priced at £285, the elegant four-seater was a credible rival to similar machines from the likes of Riley, SS, MG and even Aston Martin. Topped by twin Zenith carburettors, its 1087cc four-cylinder engine reputedly endowed the Speed Model with a nigh-on 70 mph top speed. However, it was the car's light, precise steering, powerful brakes and sweet gear change which charmed the contemporary motoring press. The Pre-1940 Triumph Owners' Club estimates that just 1,700 four-cylinder Glorias of all types were made between August 1933 and July 1934.

This particular example - chassis number 41777 - was prepared for, and exhibited on, Triumph's stand at the October 1933 London Motor Show. Finished in gloss black with red detailing, the Gloria Speed Model Tourer made an indelible impression on its would-be first owner. Recently married he was unable to afford the car but remained smitten enough to return to Triumph's London Motor Show stand some twelve months on. Less taken by the marque's 1935-model year line-up, he enquired after chassis 41777 and when told that it had been retained as a demonstrator promptly made a successful offer. Immensely proud of his new acquisition, the first owner treated it to a Desmo accessory mascot. Responsible for installing a heater and sidelights during the 1950s, that same decade saw him overseeing minor repairs after a motorcyclist slid into the car's rear. Very much part of the family, the Gloria Speed Model Tourer was inherited by his son who only sold it to the vendor in 1984.

Quite remarkably the Triumph appears to retain the vast majority of its original cellulose paintwork and leather upholstery. Indeed, the vendor informs us that "the car has never been restored and is presented, with some wear and tear, almost as it was sold". Over the course of the last twenty-six years, the four-seater has been treated to a fresh coat of paint for its wire wheels, renewed hood / sidescreens / tonneau cover (all remade to the original patterns) and sundry re-chroming (headlamps, windscreen side pillars). While more recently it has benefited from a new clutch plate and thorough engine overhaul including conversion to shell bearings. As well as a set of original spark plugs and tools, the under bonnet area plays host to an oil can, auxiliary 'starter' button and special lighting. The veteran of numerous rallies (one of which saw it sustain a slightly dented wing since straightened), chassis 41777 is believed by the vendor to be "one of just two 1934 Triumph Gloria Speed Model Tourers currently in running order". Again to the best of his knowledge, he considers the car to be "totally authentic in all its details and the only pre-WW2 Triumph in running order that has never been restored".

A true timewarp with a lovely ownership history, this very rare Post Vintage Thoroughbred is potentially eligible for a host of VSCC and Pre-1940 Triumph Owners' Club events. A wonderful motor car, it is a 'must see' for those who appreciate originality and character.

PLEASE NOTE: This vehicle does not have an MOT certificate.
Share: