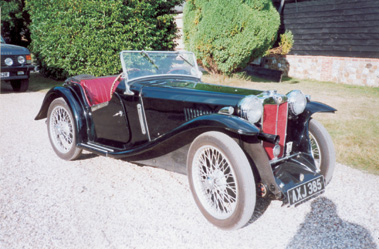 By the 1930s, and thanks to relatively cheap pricing and affordable running costs, Sir William Morris's little sports-cars had proved hugely popular with bright young things, many of whom could employ their MGs for motor sporting weekend work. Indeed, there was little to rival the Midget in production form, the 75mph P Type being launched in 1934.
Compared to earlier models, the PA's leaf-sprung chassis was stronger and had a longer wheelbase, and the 12in diameter drum brakes were larger and more powerful. The single overhead cam engine of 847cc capacity, though dimensionally the same as that powering J1 and J2 Midgets, now had three main bearings and was both more robust and smoother running in service - and the 35bhp at 5600rpm could be further boosted by mods. and tuning without reducing reliability unduly.
This PA was built at the MG works in Abingdon in the first year of the model's production and comes with two brown logbooks, current V5 and various former MOTs. According to the vendor, a fresh MOT test is likely to have been undertaken after the entry was made. The open 2-seater was last restored a few years ago, more recent work including a rebuild of the 4-cylinder motor, which still needs running in, and the hood has been renewed. The 4-speed manual gearbox is reportedly in good order, current condition of the bodywork is described as sound, the black paintwork only slight microblistered and the red interior good.
PLEASE NOTE: The engine size for this car is 847cc and not 950 as printed in the catalogue.
PLEASE NOTE: This vehicle now has an MOT until Feb 2005.
Share: