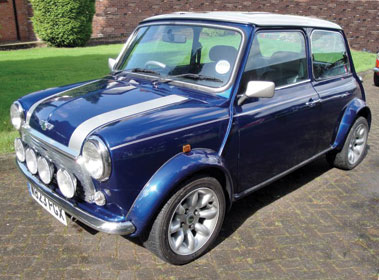 After almost 5.5 million had been made, the last Mini rolled off the production line at Longbridge on October 4th 2000. Alec Issigonis' purest design redefined the small car, this masterpiece of packaging making best use of its tiny - just over 10ft - length to seat four adults. Revolutionary features such as the gearbox tucked under the transverse engine, tiny 10in wheels and innovative architecture - putting the body seams on the outside - made use of every cubic inch of volume. Its sparkling handling made it irresistible to the tuners, including John Cooper, whose hotted-up Mini attracted the attentions of BMC and Issigonis. From 1961, the factory offered the Cooper as a regular production model, with the still more powerful Cooper 'S' available from 1963. Soon, as well as being driven by royalty, Minis were practically unbeatable in rallies. By 1964, the Cooper had evolved to its definitive 1275cc incarnation. The Mini grew up from its humble 848cc origins into a fuel-injected saloon with air bags, door bars, even a front radiator. The marque was rebranded Rover in 1989 and the Cooper name, which had made the cars so famous in the '60s, was revived in 1989 by John Cooper Garages, though Cooper production was taken back in-house by Rover in 1990, rekindling a long association between maker and its most famous model. Fuel injection arrived in 1991, and twin-point injection and taller gearing in 1997, making the car quieter and more relaxed. Cooper Sports all came with 13x6in alloy wheels, Sport Pack wide wheelarches and a host of extras including four auxiliary lamps up front and a CD player/radio. The last cars had leather seats, as here, plus aluminium detailing on the dashboard. Finished in Tahiti Blue over Silver with leather upholstery, this particular example is described by the vendor as being in "very good" condition with regard to its engine, gearbox, electrical equipment, interior trim, bodywork and paintwork. Stated to have covered just 59,100 miles from new (a figure apparently substantiated by "nine service stamps"), this appealing Cooper Sport is further understood to retain its "original folder and spare keys". An opportunity to purchase one of the last, most highly regarded versions of this iconic model in its 50th anniversary year.
Share: